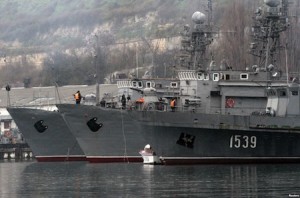 There has been no let up in the political tension in the Crimea peninsula of southern Ukraine this week where thousands of Russian troops have occupied strategic locations, including the port of Sevastopol.

Reports indicate that feeder and short sea operators are being hindered in their passage and navigation of the port by the Russian and Ukrainian navies, with vessels operating in the Black Sea either being diverted to Novorossiysk in Russia or sent back to the Greek port of Piraeus. Sevastopol is the base of the Russian Black Sea Fleet

Søren Tousgaard Jensen, general director of WWL Russia, told Automotive Logistics that because the company does not have any direct calls to the Black Sea it is fully dependent on these feeder and short sea operators; he pointed to uncertainty over clear passage when calling at Sevastopol. However, it is the cargo owners, including carmakers, that had the greater problem, according to Jensen.

“The cargo owners have much more at stake that we do, i.e. they have the ownership and commercial settlement of the cargo, and they are considering their options on how to move the cargo from the ports, or [whether] to keep the cargo in other ports,” he said.

He added that Illichivsk port, in south-western Ukraine, was operating normally and, according to reports from the Traffic Department of SE Ukrainian Sea Ports Authority, there had been no disruptions to vehicle and general cargo operations at ports in the region in the first week of March.

MCCL, which is one of the main vehicle ro-ro operators in the Black Sea, confirmed that it has resumed trade via Ukraine with vessels on route to Illichivsk and Odessa ports.

K Line and its affiliate company KESS operates in the Black Sea but doesn't call at any Ukrainian ports so is not directly affected by the problems at Sevastopol but a spokesman for the company said that it was monitoring the situation and was ready to take appropriate measures if and when necessary together with its customers' decisions should their be wider implications for trade in the area.

Carmakers have responded tentatively to possible disruptions to transport services and trade, added to which is the prospect of sanctions being imposed on Russia “within days” by a number of countries, including the US, unless the situation is resolved. That could have an impact on trade flows in and out of the country, including those for parts and finished vehicles.

The impact on sales is also a concern. A drop in the value of the Russian ruble would lead to higher inflation and could hit consumer spending. Carmakers in Russia have been rushing to meet local production targets to maintain preferential import tariffs. There is, in the meantime, a significant amount of automotive material imported to Russia from Europe, South Korea and Japan, for example.

Meanwhile, the market has also been a growth market for vehicle exports for certain OEMs, including Toyota from the US.

“Right now we are trying to understand the situation,” said Nihar Patel, vice-president of North American business strategy at Toyota Motor Sales. “For now, there is no near term impact. We are, however, working closely with our European team (TME) to respond if the issues persist and impact overall consumer behavior in those markets.”

Ford would only state that it hoped for a peaceful resolution to the situation. President of the EMEA region, Stephan Odell, said the company was closely monitoring a “very volatile” situation and would not be doing anything in the short term. “It’s too early to jump to conclusions,” he told reporters at the Geneva motor show this week.

That point was echoed by GM’s president Dan Ammann, who pointed out that the company had significant business in Russia. GM has a 9% market share of the automotive sector there and last year sold 258,000 vehicles.

Renault also said it was monitoring the situation closely, including the performance of the Russian currency. The company has a high localisation rate of more than 80% in the country. Its partner Nissan said that it too was watching developments closely.

"We have a good supply of cars in the country and we're taking measures to protect both our customers and our business operations," said a spokesperson for the company.

The UN Security Council held an urgent meeting on Saturday during which Ukraine’s Ambassador, Yuriy Sergeyev, to the UN called on the 15-member body to do everything possible to prevent military intervention by Russia. Sergeyev stressed that recent events posed a serious threat to his country’s integrity and to peace and stability in the region.