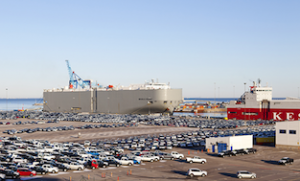 Copenhagen Malmö Port (CMP) has added 45,000 square metres of new terminal space for vehicle handling at Frihamnen in Malmö, Sweden. The area has been added to accommodate traffic handled by finished vehicle distribution company Autolink, which needs capacity to meet growing demand according to the port. The company has secured new volumes and needs additional space for its PDI terminal for vehicles being shipped to customers in Scandinavia and the other countries in the Baltic region.

CMP’s four terminals handle up to 40,000 cars from all over the world according to the company.

The area, which was previously part of an old dock in Frihamnen, has now been filled with dredged material. One third of the space was taken into use in 2012.

“The expansion of Autolink and other companies in the area shows that the region is developing rapidly,” said Johan Röstin, CEO of CMP. “The completion of the new terminal also shows that CMP is able to grow with its customers and offer adapted logistics flows. And that we are able to make unused land available to both existing and new customers in a short time. In this way, CMP can be a distribution hub for additional operators supplying a wider region, for example the Baltic States.”

In another development involving Malmö, rail freight provider Green Cargo is opening a rail link that carries truck trailers and containers from Trelleborg and Malmö in Sweden, to Alnabru on the outskirts of Oslo, Norway. The service is being run in conjunction with CargoNet, the Norwegian freight train operator.

The new rail link is launched on September 15. Green Cargo will operate intermodal trains three times per week with departures from Trelleborg and Malmö on Sundays, Tuesdays and Thursdays. Trailers and containers arrive in Alnabru, ready for delivery at 11.30am the day after being handed in (evening pick-up). Departure days from Alnabru are Mondays, Wednesdays and Fridays.

“This is the main transport route into Norway and a key link to our Norwegian network,” said says CargoNet’s CEO Are Kjensli. “Competition from road freight is intense but now, in partnership with Green Cargo, we can provide an interesting alternative.”

“From Green Cargo’s viewpoint, it is important to be able to offer an intermodal solution between Skåne and the Oslo area with competitive pick-up and delivery times,” said Green Cargo’s CEO Jan Kilström. “We now have this capability in place and we strongly believe in this way of linking our intermodal traffic to networks in Norway and the continent.”