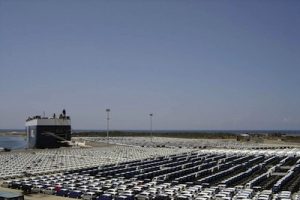 Automar Logistics has taken a 50% stake in the vehicle terminal operated by BLG Logistics at Italy’s Gioia Tauro port (pictured) for an undisclosed sum.

Automar, which is part-owned by the Grimaldi Group, provides port-based pre-delivery inspection services and road transport for finished vehicles (Bertani, Elia Ambrosetti and Mercurio are also shareholders). The company already operates the vehicle terminal at the Italian port of Salerno and last year took over 400,000 sq.m at Civitavecchia port, also in Italy. Gioia Tauro, meanwhile, has 320,000 sq.m dedicated to the trans-shipment of vehicles and is Italy's largest vehicle ro-ro terminal.

“We're certain of significant growth in automobile trans-shipment,” said Michael Blach, head of the automobile division at BLG. “The Mediterranean region is set to gain in importance as a hub. With the automobile shipping line Grimaldi at our side, we'll substantially boost activity at the terminal in Gioia Tauro.”

That boost is needed given that last year, Gioia Tauro handled a total of 62,000 vehicles, a drop of 32%. According to BLG, the main reason for that decline was a heavy decrease in the trans-shipment of cars for the North African markets but the company anticipates a rebound in those movements.

A spokesperson for BLG suggested that the cooperation with Automar and Grimaldi would bring important assets for future activity at Gioia Tauro: namely the development of services at the automotive terminal, vehicle transport inland – Automar is providing the links to the Italian hinterland with its production sites and dealers – and, finally, the business associated with Grimaldi’s movement of vehicle volumes in the region.

For its part, Grimaldi said it was too early to discuss the aims it and Automar had for the port as strategic plans were still being drawn up.