Spanish terminal operator Autoterminal, part of the Noatum Maritime Group, has signed an agreement with Abu Dhabi Ports in the United Arab Emirates (UAE) to set up a joint venture car terminal at Khalifa port. The joint venture will be called Autoterminal Khalifa Port and will handle vehicle imports and transhipments. 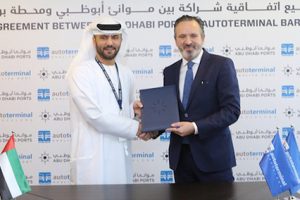 In addition to standard storage and processing services, the 300,000 sq.m facility, which has its own dedicated 550-metre quay, will provide value-added services including pre-delivery inspection (PDI) and vehicle customisation, alongside other technical services. It will also benefit from being in the Khalifa Port Free Trade Zone. The companies have not so far revealed an investment figure.

In a joint statement, the partners said their main objectives in the short term were to provide the same level of quality that Autoterminal offers at the port of Barcelona in Spain, and to position Khalifa port as a regional hub for all commercial trade in the Gulf, East Africa and the Red Sea.

Autoterminal parent Noatum Maritime Group recently formed a new division called Noatum Maritime Automotive to bring together all finished vehicle and rolling stock handling activities at the Spanish ports in which it operates. In terms of car handling, this amounted to over 1.2m units in 2017.