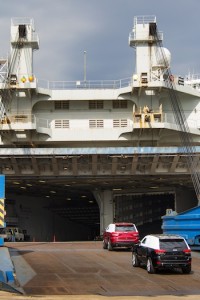 The US port of Baltimore has officially opened a new automotive berth at the Masonville/Fairfield terminal following an investment of $22m. At 358 metres it is 90 metres longer than the existing berth and nine metres wider, as well as being much stronger. It is also equipped to handle rail transport, though the port has not announced which rail provider will be supporting shipments to and from the facility.

“This new auto berth will further bolster the port of Baltimore’s already strong reputation as the leading auto port in the US and is welcome news for the nearly 1,100 direct jobs that are generated by the Port’s auto business,” said Maryland transportation secretary, James Smith. “Thanks to the leadership of Governor Martin O’Malley and Lt. Governor Anthony Brown, Maryland will continue to make the necessary facility and infrastructure investments to ensure the Port of Baltimore remains the premier auto port in the country.”

Last year the port handled more than 750,000 vehicles and is ranked as the top port in the US, and the second in North America, for handling vehicles and high and heavy equipment. The top three OEMs using the port are Chrysler, Ford and Mercedes Benz.

The berth is now in use and, along with Chrysler and Mercedes, is handling volumes for Fiat and Toyota.

In addition, the port has seen an increase in BMW imports and last month the German carmaker opened a vehicle distribution centre at the port, which is being managed by Wallenius Wilhelmsen Logistics (WWL).

With the new berth open, the port is aiming to handle more than 800,000 vehicles in the near future.

Smith was joined at an official opening ceremony last week by Maryland Port Administration’s executive director, James White, and members of the Maryland Port Commission. The opening coincided with the 300th meeting of the Commission, which establishes policies for improving the competitive position of the port within the international maritime industry.