Barra to replace Akerson as GM's CEO in January 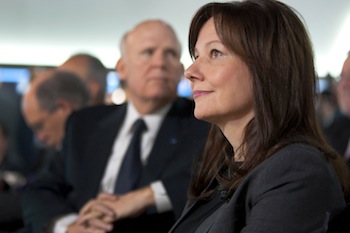 Dan Akerson is stepping down as chairman and CEO of General Motors in January next year and will be replaced in the CEO role by Mary Barra, currently executive vice president, Global Product Development, Purchasing and Supply Chain (pictured). The responsibilities of chairman will be taken up by Theodore Solso, former chairman and CEO of engine and fuel systems supplier Cummins, who has been on the GM Board since June 2012. Barra will also join the GM Board.

“I will leave with great satisfaction in what we have accomplished, great optimism over what is ahead and great pride that we are restoring General Motors as America’s standard bearer in the global auto industry,” Akerson said in a message to employees.

Akerson was named GM chairman and CEO on September 1, 2010 and since the company’s bankruptcy in November 2010 has turned the company back from being majority owned by the US Treasury to being publicly traded.

“My goals as CEO were to put the customer at the centre of every decision we make, to position GM for long term success and to make GM a company that America can be proud of again,” he said.  “We are well down that path, and I’m certain that our new team will keep us moving in that direction.”

Mary Barra has risen through a series of manufacturing, engineering, and senior staff positions over a 33-year career with GM and has been central to the company’s ongoing turnaround according to the company. She will the first female CEO of a major carmaker when she takes up the role next month.

Barra was named senior vice president, Global Product Development in February 2011, responsible for the design, engineering, programme management and quality of GM vehicles around the world. In August this year she assumed responsibility for GM’s Global Purchasing and Supply Chain organisation and was named executive vice president, Global Product Development & Global Purchasing and Supply Chain. She is a member of the GM Executive Operations Committee and serves on the Adam Opel Supervisory Board.

“With an amazing portfolio of cars and trucks and the strongest financial performance in our recent history, this is an exciting time at today’s GM,” said Barra. “I’m honoured to lead the best team in the business and to keep our momentum at full speed.”