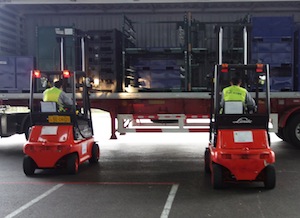 Shares in Beijing Changjiu Logistics have doubled in value after it became the first private Chinese automotive logistics company to go public in a launch on the Shanghai stock exchange on August 10th.

The company, one of the largest third party providers serving the automotive sector in China, has so far only suggested the public offering would help it to lower overall costs and attract new customers. However, Beijing Changjiu, which has an international logistics division, CDC, as well as a ro-ro shipping arm, Kingfour, is expected to use the capital raised to invest further in multimodal and international services.

Changjiu Logistics, which provides logistics planning, transport, warehousing and distribution services to a range of automotive companies, is somewhat set apart from the other, larger players in China’s third party automotive logistics marketplace.

Beijing Changjiu, however, which is led by chairman of the board Bo Shijiu, has been expanding its services to the automotive industry both within China and in international markets over the last few years, with a number of deals announced ahead of the public offering.

In June, it signed a deal with Lingang Modern Logistics to deliver vehicles for BMW-Brilliance Automotive (BBA) from Shenyang, in north-east China, to Shanghai via coastal waterways for further distribution in the important east China region. The BBA contract sees CDC, which is owned 70% by Changjiu and 30% by the port of Dalian, manage the sea voyage via Kingfour Marine, a wholly owned subsidiary of CDC that has recently acquired new ro-ro vessels for short-sea and inland barge shipping in China.

That followed a three-year contract signed in April with BMW-Brilliance to move vehicles from the carmaker’s Shenyang plant by truck to the vehicle terminal at the port of Dalian, a distance of around 400km.

The company is already part of a joint venture operating a weekly rail freight service between Harbin in China and Hamburg, Germany.

Earlier this year, Anji Automotive Logistics, the logistics subsidiary of Chinese OEM SAIC Group, said it was studying the feasibility of an overseas stock listing.