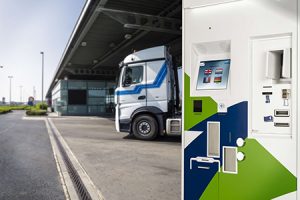 The Belgian authorities have denied there is any shortage of working onboard units (OBUs) required for the new HGV toll that came into force in the country on April 1st, despite the large queues of trucks that reportedly built up at Belgian borders on the first day because transport operators and drivers were unable to obtain the devices.

A spokesman for Viapass, the government agency that oversees the new toll, told Automotive Logistics that by the time the toll began, some 493,000 OBUs had been distributed. “There is no shortage,” he stressed. “But due to the fact that [some] truckers waited to the very last moment to order their OBUs, the systems obviously were overburdened. Now, the situation [has returned to] normal. There is no shortage and the rush of ‘late’ customers is over.”

A spokesman for the International Road Transport Union (IRU) confirmed that the blockades of roads in the south of Belgium by truck operators protesting about the toll – some of whom suggested it would add around 8% to their operating costs – ended on April 8th, following police intervention. The IRU continues to maintain that many of the OBUs initially delivered were not working properly and that replacement units were slow to arrive, however.

“According to official sources, only 5% of OBUs malfunctioned,” said the spokesman. “IRU believes this figure to be higher, following information received from Irish, UK, Dutch, French and German member associations.

“We understand from our Belgian member FEBETRA that problems still persist and we maintain our belief that enforcement should be suspended until these problems are resolved,” he added.

The Viapass spokesman said the blockades were “initiated by a couple of independent hauliers” and had lasted “about three days”. He admitted that just over 600 OBUs had not been working properly but added that in around 4,000 other cases where a red light was showing on the OBU, it was either because of invalid registration papers or invalid payment means.

Enforcement of the toll had not been suspended, he confirmed. “It is now two and a half weeks since startup. Everyone should have an OBU in their truck and those without one will be fined €1,000,” he said. “Anyone having trouble getting hold of an OBU needs to recognise that it has been possible to get hold of one for the last six months.”

He declined to say, however, how many fines had been issued so far.

OBU provider Satellic, which also runs the toll and carries out enforcement, has not so far responded to a request for comment.