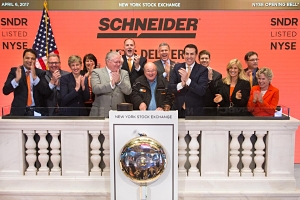 The Wisconsin-headquartered company, family-owned since it was founded by Al Schneider in 1935, was also given the opportunity to ring the opening bell, heralding the start of trading on its first day of trade.

In October last year, the company first revealed plans to go public during 2017.

One of the company’s 11,000 drivers, Bob Wyatt (pictured centre), was given the duty of ringing the bell on Thursday morning (April 6th) in New York. He has been with the company for 44 years, logging over 5m miles.

“From day one of planning, we wanted the honour of ringing the opening bell to be a representative of the hard-working associates that provide the difference for our customers,” said Chris Lofgren, Schneider’s CEO.

The company sold a total of 28.95m class-B shares at $19 each, the middle of an $18-20 price range that the shares were marketed at in the run-up to the listing.

Of the shares sold, 16.84m were new shares and 12.11m were shares owned by existing shareholders in the family-owned business.

The IPO’s underwriters have also been given a 30-day option to buy 4.32m new shares at the initial offering price, potentially raising another $82m.

The shares closed the first trading day at the offer price, valuing the company at $3.3 billion.

The firm said the IPO “allows the company to continue its commitment to Wisconsin and the communities in which we live and operate, while maintaining and enabling further investments in our long-term positioning”.

According to data from SJ Consulting for 2015, the company’s third-party logistics business ranks 30th in the world with revenues of $2.4 billion. It is also the seventh largest (and largest privately-owned) trucking company in the US.