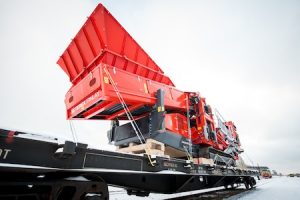 The company is currently transporting a Liebherr R984 hydraulic excavator from France to South Africa.

WWL ALS arranged for road transport of the excavator, which it collected from Liebherr’s manufacturing plant in Colmar, France on March 21st for a four-day journey to the Belgian port of Zeebrugge. There it was loaded for onward ocean transport to Durban port in South Africa aboard a WWL vessel. That vessel is currently in transit to Durban and final delivery is expected around 20 April.

The machine is being shipped in seven pieces with the largest weighing 72 tonnes.

The company said several trailer loads have been used in the transport of the equipment to the port, including a specialised 5-axle low loader.

WWL ALS has also recently transported a Terex 883 Tracked Screen (pictured) weighing 32 tonnes from Northern Ireland to Kazakhstan in Central Asia. The machine was moved from the factory in Omagh to the UK port of Harwich for shipment to the Estonian port of Paldiski. Once there it was transferred to rail wagon for transport to its final destination at Karagandy in Kazakhstan by Estonian rail freight provider EVR Cargo.

In other news the company has opened a new office in Aberdeen, Scotland alongside existing offices that are part of the wider the Wallenius and Wilhelmsen shipping groups. The division said the move would enable it to have a local presence to support and develop activities and enhance relationships with key companies, in particular those that are active in the oil and gas sectors, as well as in alternative energy sectors such as wind, wave and tidal.

“A joint approach with our group partners will enable us to share resources, and offer both potential and existing Group clients integrated solutions,” said the company in a statement.

Wallenius Wilhelmsen Logistics bought a 60% stake in ALS back in 2012.