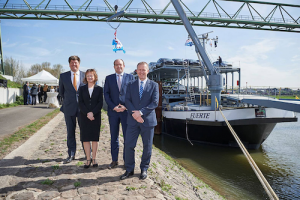 BLG-Interrijn Automobiltransporte, the joint venture between Germany’s BLG Logistics and Dutch ro-ro provider Interrijn Autotransport, has christened its sixth inland waterway ro-ro vessel. The Fuerte is a 135-metre-long vessel with capacity for 500 vehicles and will be used for the transport of Ford vehicles between its plant in Cologne and ports on the European west coast, mainly Vlissingen and Antwerp.

Last year BLG Interrijn Autotransport moved more than 200,000 vehicles for Ford on the river Rhine. The christening of the latest vessel was carried out at the BLG Auto Terminal in Duisburg, Germany by Helen Clarke, Ford of Europe’s vehicle logistics manager.

“For the Ford Motor Company, transportation via water has always been of great significance,” said Clarke. “Accordingly, in the history of our company, numerous production plants have been deliberately located in the proximity of natural waterways, such as rivers and channels, and near trading ports. Inland shipping is and remains a key element of our transport network since it offers an extremely efficient way of moving, in particular large, vehicle volumes between different locations.”

Ford began using the Rhine to move vehicles back in the 1980s, at that time with the joint venture Interrijn Harms RoRo, but since BLG’s takeover of EH Harms in 2007 BLG Interrijn Automobiltransport has been performing all shipments from Cologne and the western ports for the carmaker.

Like its sister vessel the Forenso, the Fuerte can also transport buses and tractors. Besides shipments to and from Cologne, both ships are employed regularly for scheduled services from Mannheim to Rotterdam and Antwerp.

“The many years of cooperation indicate the importance of inland shipping for automobile transport and the commissioning of the Fuerte stands for further expansion of our partnership with Ford,” said Michael Blach, board member of BLG.

At the event in Duisburg, Louis Kanters, managing director of the Interrijn Group, added some history on its services for Ford on the Rhine: “The impetus for transporting vehicles via car carriers on the Rhine came from Interrijn in 1981,” he explained. “Our client Ford was open to this suggestion and the geographic location of the plant permitted corresponding implementation.

“Initially, ship transport took place via a detour by truck to the Niehler port in Cologne. The vehicles were loaded onto the inland vessel at the former Harms terminal there. That changed in 1995 when inland shipping was linked to the oil ports. As of then, the vehicles were loaded directly from the Ford production plant onto the ro-ro ships. The main export volume still goes to England and southern Europe via Vlissingen and Antwerp.”