BLG invests in car deck and rail infrastructure at Bremerhaven 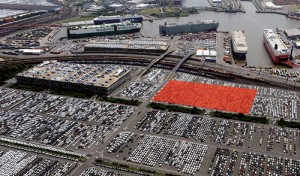 BLG Logistics, which provides ro-ro handling services at the port of Bremerhaven in Germany, is investing €20m ($31m) in a new multi-story parking deck at the auto terminal situated at Bremerhaven Nordhafen. The additional terminal is being built as BLG anticipates vehicle handling to increase at the port following a year that saw record volumes handled, estimated at 2.3m units.

The new facility will provide parking capacity for an additional 6,000 vehicles on six levels. This builds on the seven existing multi-story parking decks that already offer space for 50,000 vehicles.

The latest facility is due to be completed by the third quarter of 2015. The company said that, aside from providing protection for vehicles, the parking decks would increase parking capacity close to the water. As a result, driving distances to the large car carriers would be shortened, which would improve the productivity of the terminal.

In addition, work on rail infrastructure at the auto terminal is going ahead at the same time. The first stage of a track extension at Bremerhaven Kaiserhafen will be completed in the first quarter of 2015. BLG said this would make it possible to operate more car carrying trains and unload them faster.