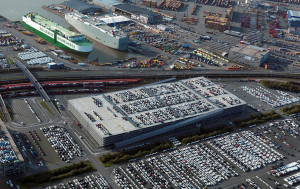 BLG Logistics has started operations on a new multi-level parking deck at its automotive terminal in Bremerhaven, Germany. The N3 facility, which has five levels, provides parking space for 6,000 vehicles over 144,000 sq.m, increasing capacity for BLG’s vehicle handling operations at the port. The company said it was one of the biggest car parks in Germany and that it had been able to open the facility six weeks ahead of schedule.

“Bremerhaven is one of the most important transshipment hubs for the automobile industry worldwide,” said Martin Günthner, senator for economic affairs, labor and ports, at the official inauguration, which took place on Tuesday (November 3rd) in Nordhafen. “Over 2m vehicles go out into the world via Bremerhaven every year, primarily to the USA, East Asia and the Near East. In the other direction cars from Korea, Japan and the US are imported via Bremerhaven.”

In total there are now eight multi-level parking decks and a large covered parking area at BLG’s Auto Terminal in Bremerhaven. They provide room for more than 50,000 vehicles.
BLG finalised its plans for the investment in the new deck in November 2014 following input from the major German OEMs that further growth in their exports overseas was expected in the coming years. The parking deck was officially handed over on October 15 this year.

“Bremerhaven has held its position as one of the leading car terminals in Europe for many years. Through the new parking deck we are fit for the future,” explained Michael Blach, member of the BLG Logistics board of management. “Thanks to the outstanding cooperation of everyone involved, we managed to start up operation of N3 earlier and stay within the budget.”

According to BLG new car customers appreciate the protected storage that the multi-level decks provide. Furthermore, the parking decks increase parking capacity near the water, which in turn shortens the distances to the ocean-going car carriers and enhances terminal productivity. Along with the construction of the N3 facility Bremenports has optimised the rail infrastructure supporting the growing vehicle volumes at the port by expanding the Kaiserhafen railway station.