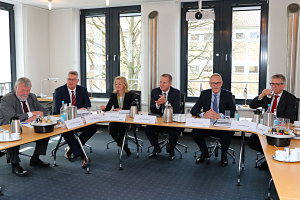 German logistics provider BLG Logistics has reported sales of €1.05 billion ($1.11 billion) for 2016, with its automobile division achieving a 2.6% increase in revenues to €473.7m.

The division’s earnings before interest and tax (Ebit) did, however, show a year-on-year decline of 18.4% to €15.1m. The firm said this was caused by issues including productivity losses and lower handling volumes at the Bremerhaven Auto Terminal, as well as self-contracting by one of its clients in Eastern Europe.

In its annual report, the company said the VW emissions scandal had had a “slightly negative” impact on volumes at Bremerhaven, which fell from 2.3m vehicles in 2015 to 2.1m last year.

The BLG automobile division handles finished vehicles and includes terminals throughout Europe at seaports, on major rivers and inland. It also owns its own fleet of trucks, barges and rail cars. Overall volumes reached 6.3m vehicles in 2016, according to the annual report, down from 7.3m in 2015.

In January, Andrea Eck (pictured third from left), formerly with Volkswagen, officially joined as director of the division.

The biggest contributor to sales of the three divisions was contract logistics where a top line number of €574.5m was reported, up 20% or €95.7m from a year earlier.

The container division, represented by half of the shares in shipping and container terminal company, Eurogate, grew sales by 8.1% or €24m to €319.7m.

Speaking at an event to announce the financial results, CEO Franke Dreeke (pictured second from right) said the overall operating result of the BLG Group was slightly above that of the previous year.

He also highlighted that despite global uncertainty, the company had had a better start to the year than in the same period in 2016.

“The world situation has not become any clearer; rather tensions are tending to increase. Possible trade barriers are a daily subject of discussion. It’s not getting any easier to make prognoses,” he said.

“The BLG Group started off the year better than in the previous years – that’s something we can affirm. For this reason, we are optimistic that we can implement our planning for 2017.”