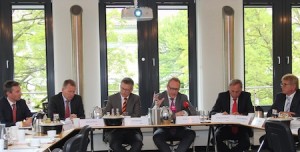 BLG Logistics has reported an increase in the handling of finished vehicles thanks to Asian and US exports but its operating results have been hit by poor economic conditions in Europe and a drop in high and heavy, and offshore logistics.

The German company handled 7.5m vehicles in 2013, around 100,000 more than the previous year. Of those, 2.18m vehicles processed through the port of Bremerhaven – 30,000 more than in 2012. The company said that the figures primarily resulted from exports to Asia and the US, which accounted for around 80% of activity.

Imports through Bremerhaven have been in part lowered because a number of Asian carmakers have set up manufacturing facilities in Eastern Europe and vehicles are no longer moved through the port, though BLG said that this shift has benefited its car transport business and its Kelheim car terminal.

At the annual results press conference, held in Bremen last week, CEO Frank Dreeke said that the difficult economic climate had led to heightened competition and considerable pricing pressure. This, coupled with the declining developments in the high and heavy and offshore logistics areas, saw the BLG’s operating result drop to €37m ($51m), down from €48.6 ($70m) the previous year. The company has reduced its pre-tax earnings to €20.2m. However, Dreeke added that the company was able to record a growth in sales.

“Despite the generally unsatisfactory economic developments, we were able to record growth in sales, with almost €1.2 billion for 2013. This corresponds to an increase of 3.1%,” said Dreeke.

According to the company its contract logistics business showed positive results with growth across all business fields, and new contracts that included distribution logistics for Bosch Thermotechnik in Butzbach near Frankfurt, and car parts logistics in Brotterode, Wackersdorf and Tuscaloosa in the US.

BLG has now established a number of logistics training courses in the US, including at Tuscaloosa county. Following the successful introduction of a course at Brookward high school last year, programmes have now been set up at two more schools: Paul W Bryant and Bessemer. The courses are put together by BLG and the Germany logistics organisation BVL. Eight students finished the first one-semester class at Brookwood and have all now started full-time jobs with BLG.

Back in Europe, Dreeke expects the economic recovery to take some time. “We are doing all possible to ensure our business is profitable, and to consistently implement the new efficiency-boosting and restructuring programmes. Overall, BLG expects a slight increase in sales this year, and an operating result similar to that of 2013.”