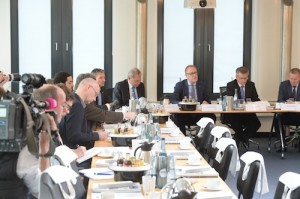 BLG Logistics has reported a moderate 3.3% rise in sales to almost €883m ($986m) during the 2014 financial year and said that increased earnings in the automobile and container divisions were major factors in the results, which also saw pre-tax earnings rise by €17.4m to €30.1m.

The German logistics provider said that in spite of poor economic development in Eastern Europe there was a strong performance in the Automobile division in 2014, during which the company handled 7.4m vehicles.

“An increase in technical value added, an effective efficiency enhancement programme at the BLG AutoTerminal Bremerhaven and a considerable car export volume are responsible for this result,” stated the company.

The terminal at Bremerhaven handled a record volume of 2.3m vehicles, up almost 5% on the previous year.

In anticipation of further growth in German vehicle exports in the near future, BLG is investing in a new parking deck in Bremerhaven with 7,000 spaces.

According to the company business activities were also boosted at the inland terminals in Duisburg, Kelheim and Dodendorf.

Niedersachsen Ports is also building a new dock for BLG’s vehicle handling in Cuxhaven, with work having started in March this year.

“We have identified automobile handling as a growing field for our ports,” said Holger Banik, managing director of Niedersachsen Ports. “Through this measure we are strengthening our competitive position. After Bremerhaven and Zeebrugge most of the cars in Europe are handled in the ports of Lower Saxony.”

Automotive parts handling was also a strong focus in BLG’s Contract division, with extensions to operating space at BLG’s facilities in Bremen completed.

In the rail transport segment BLG said it extended its range of activities to include more value added activities, including the commissioning of a modern rail service and logistics centre in Brandenburg.

Taken together the Eurogate locations at Bremerhaven, Hamburg and Wilhelmshaven – which can serve the biggest container vessels currently operating –handled 8.1m TEUs, corresponding to an increase of 3.5%.

“Although the development of the past months has persisted at the beginning of this year – sluggish economic recovery, structural adjustments in the euro area, slow growth in newly industrializing countries, geopolitical unrest – I anticipate continuation of the moderate growth course,” said Frank Dreeke, head of BLG.

He also looked forward to a growth rate of 3-4% in the Automobile division for 2015 and said the company was investing further in the Bremerhaven Auto Terminal.

Growth in the Container division is expected to increase by between 2.5% and 3.5%. Further expansion is also planned for the e-commerce and freight forwarding segments.