German finished vehicle logistics provider BLG has sold half of its share in the vehicle terminal it operates in Dabrowa Górnicza, Poland – Auto Terminal Slask – to STS Logistic, which provides vehicle transport services in the country and the wider central and eastern region. STS Logistic already operates its own terminal in Swarzedz, near Poznan. 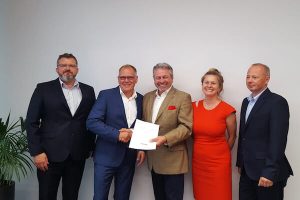 The terminal at Dabrowa Górnicza, which is in the north of Poland, operates under the BLG subsidiary ATS Logistics, of which STS Logistic is now a 50% owner. The move is the first step in a closer cooperation between the two companies in that market and they will be further developing the site, said Pawel Byglewski, an executive manager at ATS and regional officer for Poland at BLG.

"BLG was looking for a strong partner on the terminal while STS was searching for a partner as well as space," said Byglewski. "At Dabrowa Gornicza the interests of BLG and STS matched."

The terminal covers an area of 115,000 sq.m. It can handle and store 4,000 vehicles, as well as providing technical services at an onsite workshop.

"This is enough for today's customer structure," said Byglewski. "The Polish market is growing and we have potential volumes, which we can bring to the terminal. Furthermore, the eastern European market is developing and the location is perfect as a consolidation point for loads on their way to Ukraine or Russia. For that we are planning to extend the existing terminal."

Auto Terminal Slask provides services for Skoda and Ford for the Polish market, as well as some brands for the Bulgarian and Ukranian market.

According to BLG, vehicles are brought in from the Czech Republic, Germany and Turkey via the Slovenian port of Koper. Then, from Dabrowa Górnicza, they are delivered to dealers in Poland and the other countries markets. As well as road haulage, the site has three rail connections and three end-loading ramps.