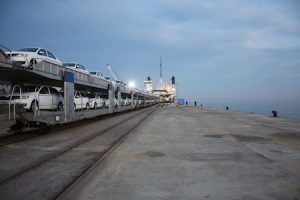 “When the line to the port of Koper was hardly accessible because of heavy snowfall, a specific inquiry came from Skoda for running two trains to the Asian part of Turkey at short notice,” said the company in a statement. “BLG AutoRail was able to submit a binding offer concerning price and performance within 36 hours.”

The first train left Skoda’s Czech plant on February 7 this year, followed by a second train on February 10. According to the company, specialised security forces guarded the trains from the Slovakian-Hungarian border on a four-day journey along a 2,300km route to the Turkish port of Tekirdag.

At that port the rail wagons were shunted onto a rail ferry and reached the port of Derince located in the Asian section of Turkey after a six-hour voyage. In total the journey took fewer than five days, and all the vehicles arrived damage free. There the wagons were taken from the rail ferry to the port area and unloaded by means of a mobile ramp.

“Our client was so satisfied with the running time and quality of the rail shipments that we take this as an incentive to establish regular service to and from Turkey,” said Gerald Binz, managing partner of BLG AutoRail.