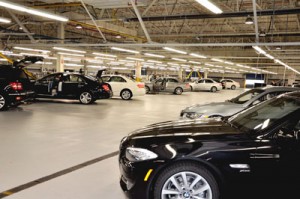 Mercedes-Benz USA (MBUSA) and BMW North America will end a cooperation agreement whereby Mercedes-Benz has processed BMW imports at its terminal at the port of Baltimore, Maryland. The operations will terminate at the end of May, from which point Wallenius Wilhelmsen Logistics (WWL) will take over processing activities for BMW.

According to Kenn Sparks, a spokesperson for BMW North America, Mercedes-Benz decided to end the contract early.

“[Mercedes-Benz] gave us more than six months notice,” Sparks told Automotive Logistics. “Both companies decided to move in a different direction and therefore we agreed to dissolve our joint operation. We wish Mercedes-Benz nothing but the best in Baltimore.”

The agreement, signed in 2009, was a surprising collaboration at the time between two fierce competitors, especially since MBUSA does in-house processing and would directly handle BMW vehicles. The agreement also included a joint distribution arrangement from Baltimore for the transport of vehicles.

However, the benefits of sharing the MBUSA terminal appear to have reached their limits, particularly as both brands are growing in the US.

“It was a great idea, but the reality is that we are both in growth mode, and we have a responsibility to meet our customers’ expectations,” said Rory Anne Hepner, general manager of vehicle distribution and logistics at MBUSA, speaking at FVL North America 2014 last week in California. “That caused a lot of challenges for both of us to meet demands of both Mercedes-Benz and BMW. We made a joint decision that it would be better for us to go our separate ways.”

According to Sparks, BMW will continue to use Baltimore as a port of entry, but it will move its processing to the other side of the port, in Dundlak, where WWL will handle its vehicles.

While the processing and distribution agreement had been hailed as a rare act of collaboration between competitors, as long as two years ago MBUSA and BMW logistics management had hinted that the benefits of the agreement were stronger on paper than in reality. For example, in an interview with Automotive Logistics, executives explained that because the carmakers share such a similar dealer network, the distribution out of Baltimore tended to create even more trucks with no freight to carry on on the return haul. A more efficient collaboration would have been between OEMs that could offer a more balanced transport flow.

Both carmakers share similar import networks in the US. BMW uses the port of New Jersey, along with Baltimore, Brunswick (Georgia) and Hueneme in Oxnard, California. MBUSA uses Baltimore along with Brunswick, and will soon shift its location in the Los Angeles area from Carson to a former Boeing factory in Long Beach.

Note that Finished Vehicle Logistics is partnering with AIAG to host a one day conference this summer on import and export flows, held at the port of Baltimore. Keep checking this site for more information on Import/Export North America 2014.