BMW and Mini launch online parts stores in the UK 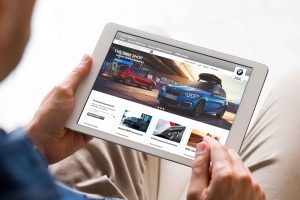 New online stores have been launched for the BMW and Mini brands in the UK, allowing car owners to buy parts and accessories for collection at nearby dealerships or for delivery.

By selecting their vehicle or entering their VIN number, customers can search for parts and accessories specific to their model of car.

There are over 50,000 BMW and MINI products on offer, according to the carmaker, including lifestyle products and accessories.

A spokesperson for BMW said this was not the first time parts were being made available online, with e-commerce site Ebay being used as a sales channel in the past.

At the Automotive Logistics Supply Chain conference in Atlanta earlier this year, it was clear from aftermarket logistics executives at the event that the service parts sector was among the first distribution channels in the automotive market to feel disruption from the digital economy, as consumers increasingly buy goods and services online.

In Europe too, there has been plenty of change in recent years. One good example is France’s Groupe PSA, which in 2015 took over Mister Auto, a leading e-commerce dealer in multi-brand replacement parts handling 12,000 orders a day with around 2m customers. The move left PSA selling service parts for Peugeot, Citroën and DS models as well as rival makes including Volkswagen, Daimler and Toyota.

Earlier this year, meanwhile, Ford launched its all-makes Omnicraft brand in the US, which will eventually be rolled out to Europe and other markets.

Speaking at the Automotive Logistics Europe conference in June, Stephan Freichel, professor at Cologne University of Applied Sciences, said that meeting the demand for more parts and more frequent deliveries had led the OEM sector to provide a better service than ever before.

In late 2016 and early this year, Hyundai and Peugeot launched websites in the UK allowing customers to purchase vehicles and arrange finance online, for instance.

Amazon is also said to be ‘spending large sums’ on a European unit to sell cars, according to an Automobilwoche article citing unnamed sources

According to Nick Gill, chairman at consultancy Capgemini’s global automotive sector, which has carried out surveys on consumers’ purchasing habits for two decades, new technology is bringing carmakers and dealers closer to end customers.

“Retailers have been learning to get closer to their consumers for the past 15 years, but it is only in the last two or three years that automotive companies have really started to do the same thing,” Gill recently told Automotive Logistics.