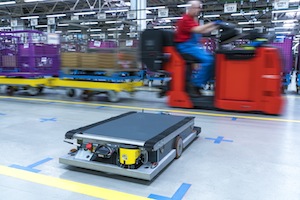 Research and advisory firm Gartner has published its annual list of the top 25 supply chain companies. The only carmaker to appear in the list is BMW, which makes its first appearance in the ranking at number 22. Toyota, which was at 24 last year, has dropped out of the list.

The Gartner Supply Chain Top 25 is now in its 12th year. Gartner compiles its ranking according to financial data and industry opinion derived from peer voting. For the financial half of the calculation, three KPIs from publicly available data are taken into consideration, including revenue growth, return on investment, and assets and inventory turns. Those numbers are prorated and weighted over the last three years.

According to Gartner, BMW received high marks from the opinion panels and a top score of 10 on the corporate social responsibility (CSR) component.

“BMW has implemented a risk filter for suppliers that takes into account location-specific and product-specific risks,” said Gartner in a statement. “Its sourcing group uses this filter to consider ESG [environmental, social and governance] risk potential for new and existing suppliers and follow up with supplier self-assessments and audits, as needed.”

Gartner also acknowledged that BMW had made significant investments in supply network visibility and digital manufacturing in line with Industry 4.0 objectives.

It highlighted a pilot project the German carmaker had tested at its Munich and Leipzig plants. This involved testing smartwatches that alert workers when a car with special requirements is approaching. It has also reduced the strain on workers by allocating physically demanding and ‘non-ergonomic’ tasks to robots.

Gartner also acknowledged BMW’s use of self-driving robots (pictured) equipped with radio transmitters and a digital map to transport up to a ton of car parts independently to their destination.

“BMW has long been recognised as a leader in automotive sustainability,” said the Gartner report. “It has reduced the volume of resources utilised and the emissions per vehicle produced by an average of 45% since 2006 through a variety of projects.

Supplier recognitionSchneider Electric, which provides automation and energy management for a range of industries, including automotive, also made its first appearance in the top 25 this year, coming in at 18 (from 34). It also scored ten on the CSR component.

“Schneider Electric has spent the last several years moving from decentralised supply chains supporting its extremely diverse customer base to one that is tailored to align with customer requirements, in a scalable way, through a small number of differentiated end-to-end flows through ordering, planning, sourcing, manufacturing and delivery,” noted Gartner.

Unilever, McDonald’s and Amazon were again in the top three of this year’s list, although Unilever took the top spot from Amazon, which dropped to third around a static McDonald’s.