BMW begins exports from Brazil to US through Paranagua port 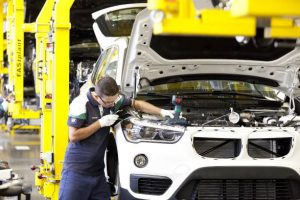 [Updated July 14th] BMW has started exports of its X1 model, made at its Araquari plant (pictured) in Santa Catarina, Brazil, to the US through the port of Paranagua, the country’s second biggest vehicle handling port.

The carmaker is aiming to export 1,500 vehicles a month from the port to the US market.

The move follows a decision back in April by the carmaker to export an initial 10,000 units of the BMW X1 from Brazil to the US market from this month. Demand for the X1 in the US has increased, according to BMW, exceeding the vehicle numbers currently being sent from the carmaker’s plant in Regensburg, Germany. Production of the X1 started there in autumn last year. BMW said it did not give predictions of sales volumes.

Three versions of the BMW X1 xDrive 28i are being produced in the Santa Catarina industrial complex for export to the US, all equipped with four-cylinder, 2.8-litre petrol engines. The plant, which also makes the 3-Series, began production in September 2014. It has a 30,000-unit capacity and BMW plans to add more models there, including the X3.

Carsten Stöcker, senior vice-president responsible for the Araquari plant, said the move to supply additional volumes of the X1 from Brazil would enable BMW to more effectively exploit local production capacity. “It is also important that the project generates jobs and income in northern Santa Catarina, maintaining our commitment to contribute to the development of the region,” he said. The new export project means BMW will create 300 temporary jobs.

Speaking back in April, Helder Boavida, president and CEO of BMW Group Brazil, said: “In addition to strengthening our position in the market, the initiative shows that the Araquari plant meets all the requirements of quality and efficiency required by BMW Group, being able to provide vehicles to other markets, including the US, which is recognised as one of the most demanding in the world.”

Production for export to the US will help BMW maintain activity levels at its Araquari plant in what is a dismal time for the auto industry in Brazil. The country is experiencing its worst recession since the 1930s, though there have been some recent signs that the car market is now stabilising.

Figures released by the National Association of Automotive Vehicle Manufacturers (Anfavea) show that production fell just 3% in June from a year earlier, compared to a 30% drop at the start of the year. Output rose 4% in June from May, meanwhile, and sales increased nearly 3%.

BMW’s plan to supply the US market from Brazil was formalised on April 19th after a meeting between Boavida, Stöcker and ministers from Brazil’s industry and foreign trade departments.

In separate news, BMW is to open its own motorcycle production site at the end of 2016 in Manaus. BMW said it aimed to make more than 10,000 motorcycles in 2017 for the Brazilian market.