BMW’s joint venture with Brilliance China Automotive Holdings – BMW Brilliance Automotive – has opened a new engine plant in Shenyang to supply its assembly plants in the nearby districts of Dadong and Tiexi. 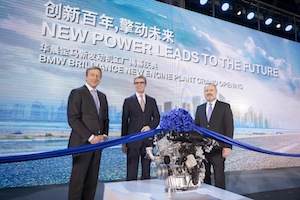 This will be the first time that engines for those plants are supplied exclusively from China. Previously the company supplied engines from its European plants in Hams Hall (UK), Steyr and Munich, along with limited supply from an older engine unit in Shenyang that produced the previous generation of 4-cylinder petrol engines.

"Plant Shenyang serves as BMW Group’s first engine competence centre in China with the complete engine production process, from foundry to final engine assembly, realized in one location," confirmed a spokesperson for the carmaker.

Combined with investments at the two assembly plants in 2015 the latest engine plant, which includes a light metal foundry capable supplying 15,000 tons of aluminium per year to it, amounts to €1 billion ($1.08 billion). The foundry is modelled on BMW’s partner plant in Landshut, Germany.

Current annual capacity at the latest engine plant stands at 300,000 units and is tied to production at the two assembly plants according to the carmaker. Last year, combined production at Dadong and Tiexi reached more than 287,000 vehicles, including the BMW 3 Series, 5 Series and X1. BMW Brilliance is also planning to add a new model – the BMW 2 Series Active Tourer – in the first quarter of this year; one of three new models in the pipeline for production at the plants in China.

“The new, ground-breaking engine plant, complete with a light metal foundry, will play an important role within the BMW Group’s worldwide production network,” said Oliver Zipse, management board member for Production, at the opening ceremony for the plant. “It forms part of our strategy for globally balanced growth with production capacity in the respective regional markets.”

The establishment of the engine plant marks a further localisation of BMW’s supply in China. The company said the investment was based on confidence in the Chinese premium market.

Each of BMW's engine plants serves as a competence centre within its global network.

"Engine Plant Munich bundles the expertise on petrol engines as well as high-end engines," explained the spokesperson for the company. "Plant Steyr serves as the centre of competence for diesel engines. Plant Hams Hall produces the award winning i8 three-cylinder engines next to other petrol units."

“As with the organisation of engine assembly, this project will entail close cooperation between [BMW Brilliance] and the BMW Group to ensure knowledge transfer from high-voltage battery production in Germany,” said a spokesperson for the company.