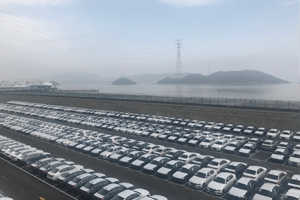 The facility, which BBA refers to as a decentralised distribution area (DDA), is being managed by Huatong Logistics and will store and process vehicles made at the carmaker’s plants in Shenyang (at Dadong and Tiexi). Volume shipments by rail to Dalian port will be taken by short-sea ro-ro vessel to Ningbo-Zhoushan port for processing. Onward distribution will be made from there by rail and short-sea/inland waterway to dealers in the Zhejiang and Fujian provinces in China. Huatong Logistics said it expected to eventually handle 100,000 vehicles through the facility each year for the carmaker.

According to BBA, 51% of the vehicles handled through the facility will be dispatched on multimodal routes combining rail and water, while 14% will be sent exclusively by rail and the remainder by road. BBA said the use of transport channels using rail and water reduced the amount of carbon emitted, making its outbound logistics more environmentally friendly. The carmaker also said the use of alternatives to road haulage prepared it for dealing with the capacity issues associated with the new regulation on trailer dimensions for finished vehicle road carriers – GB1589 (2016).

Since that regulation came into force, only single-row carriers can operate legally in China, and limitations on the length of those are being phased in at the moment, although they typically carry 12 vehicles. The next phase of the regulation will seek to eliminate outsized carriers, which will result in a loss per transporter of between three and five units, something that has customers looking for a solution to the inevitable capacity crunch in road-based vehicle transport.

[mpu_ad]Coastal networkThe Ningbo DDA will work with BBA’s first distribution facility in Shanghai port to cover the complete network of transport and storage along the China coast, according to the carmaker. Covering 136,475 sq.m, it will provide storage for 5,151 vehicles and its pre-delivery inspection (PDI) building will provide maintenance, washing and quality checking services. Value-added services include a reduction in the lead time for distribution by starting pre-haul dispatch while the vehicle is waiting for financial release.

Huatong Logistics set up the distribution facility along with Ningbo Zhoushan Port Group and Zhejiang Haigang Investment and Operation Group. It is the first project to be completed as part of a strategic agreement on East China regional logistics warehousing that Huatong has signed with its partners to support multimodal transport in China. The company said it expected to attract more car brands to use Meishin ro-ro terminal for foreign and domestic trade and develop it into a distribution centre for finished vehicles in East China as part of the ‘One Belt, One Road’ trade link initiative being promoted by the Chinese government. 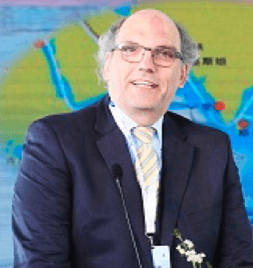 To mark completion of the facility, which was achieved in three months, BBA and Huatong Logistics were joined by partners in an opening ceremony at the end of March, attended by Franz Decker, vice-president of logistics and strategy at BBA, and Michael Tian, head of finished vehicle logistics at the company.

Referring to the carmaker’s outbound strategy, Decker said its logistics would be governed by core values including flexibility, efficiency, sustainability, innovation and digitalisation. He also emphasised the close relationship between the Ningbo VDC and economic network in eastern China.

Outbound logistics and the One Belt, One Road initiative are among the subjects that will be discussed at this month’s Automotive Logistics China conference, being held in Chengdu on April 17th-19th