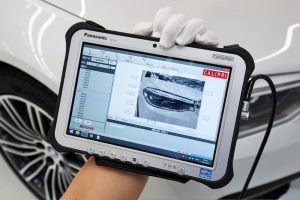 New technology is at the centre of a €1 billion ($1.1 billion) expansion of BMW’s joint venture plant with Brilliance Automotive in Dadong, China. The expansion includes a networked production system based on industry 4.0 applications, as well as mobile smart devices and supporting ‘exoskeletons’ for workers.

BMW Brilliance Automotive opened the north section expansion of its plant, which is near Shenyang, at the end of last week and marked the occasion with the completion of the first long-wheelbase version of its latest 5 Series sedan. It will now add the BMW X3 to the assembly line. All cars made at Shenyang are for the domestic market.

The expansion of the plant, which has been carried out over three years, means the joint venture now has an annual capacity of 450,000 units when combined with its facility in Tiexi.

Press plant, body shop, paint shop and assembly areas have all been increased and upgraded using the latest equipment and process digitalisation.

The production system at Dadong now has a high degree of traceability, with each vehicle, component and machine involved individually identifiable through the vehicle identification number and an automated data analysis system, which the company said resulted in greater transparency and higher quality.

“The new north section is the result of the latest technologies and comprehensive knowledge of the BMW production system,” said Oliver Zipse, member of the board of management at BMW responsible for production. “We will continue to invest in our highly innovative production sites in China. Our next project is already underway: the remodelling of the southern section of Plant Dadong. Once finished, it will give us even greater flexibility and more potential for growth.”

Workers are also being equipped with ‘exoskeleton’ suits that provide external support for the body and reduce the workload in physically demanding tasks. Mobile smart devices, such as tablets, are being used to provide those workers with exactly the information they need, according to BMW.

The Dadong facility also has its own engine plant with a light-metal foundry, which is BMW Group’s only engine production site outside Europe. It supplies the two vehicle production sites in Dadong and Tiexi with drive units for locally-produced BMW vehicles, removing the need for European imports.