BMW’s Mini division has reached an export milestone from the UK of 2m vehicles this week, 13 years after the brand was relaunched in 2001. At the same time the company reported that the three millionth vehicle has come off the production line at the Oxford plant in the UK. The company celebrated the special-anniversary vehicle – a Mini 5 Door sporting the UK’s Union Jack – at an official ceremony held at the plant on Tuesday (9 September). 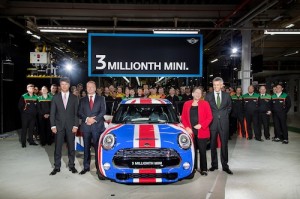 The company said that 80% of the Minis made in Oxford are exported, making it the third-largest vehicle exporter in the UK. The Mini has been exported from the UK to more than 110 countries. Currently the top three export markets are the US, Germany and China according to BMW.

“Today, we mark two important milestones for Mini: 3m Minis produced and 2m Minis exported from Oxford to customers worldwide,” said Board of Management member Peter Schwarzenbauer. “These are impressive figures and definitely a reason to celebrate.”

Most of the vehicles bound for export from the Oxford plant leave the factory from an on-site railhead according to the company. BMW has contracted rail provider STVA for the movement of the volumes to the port of Southampton but as part of a long-term arrangement between STVA and DB Schenker Rail, the German rail provider is using its own equipment to move the vehicles to Southampton.

BMW said it uses a variety of different ocean carriers from there based on its requirements.

The BMW Group produced a total of 303,177 Mini-brand vehicles in 2013 and production volume at Oxford reached 175,986 units. It currently produces the Mini, Mini 5-door, Mini Convertible, Mini Roadster and Mini Coupé models. A further 125,559 units of the Mini Countryman and Mini Paceman were contract-manufactured at MSF Graz in Austria and other assembly plants in Asia.

In addition, VDL Nedcar has started production of the Mini Hatch under contract this summer following July’s official reopening of the company’s plant in Born, Netherlands.