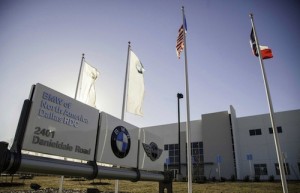 BMW has officially opened a new regional parts distribution centre (RDC) in Texas to serve the Southern US region of its dealer network. The facility, which is located in Lancaster on the outskirts of Dallas, currently covers approximately 26,000 square metres, with room for expansion. Investment in the facility stands at approximately $50m, with an approximate additiional $30m spent on inventory.

“Overnighting parts to dealerships has long been the industry norm, but with the opening of this RDC in Lancaster, we will provide same day parts delivery to our dealers in Dallas, Fort Worth, Houston, San Antonio and Austin,” said Craig Westbrook, vice president, Aftersales, BMW North America, speaking at the opening ceremony.

The facility, which was built to BMW specifications by property developer Prologis (and is leased from them), will store and distribute parts to Louisiana, Mississippi, Arkansas and Oklahoma.

Logistics provider UTi is managing the logistics in the facility and the carmaker is working with Blackhorse Carriers for transport of parts to the dealerships, though it will also be using Fedex for select supplemental shipments.

This year BMW is marking 20 years of making vehicles in the US.

“BMW directly supports and sustains more than 70,000 jobs in the US and we have just added to that number today with the opening of this new parts distribution centre in Texas,” said Ludwig Willisch, president and CEO of BMW North America, who was also at the opening.

The new facility will employ around 100 staff.