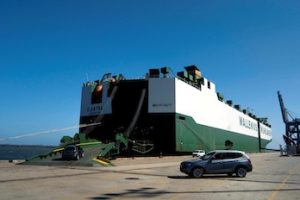 BMW exported its two millionth vehicle through the US port of Charleston last week. The BMW X5 was loaded at the port’s Columbus Street Terminal for export to Germany on board the WWL-operated vessel, Elektra.

The carmaker has been exporting vehicles from the port in cooperation with South Carolina Ports Authority (SCPA) since 1994. Last year, the SCPA handled more than 250,000 BMW exports at Charleston, helping to drive a 13% year-on-year increase in finished vehicle volume through the port.

SCPA also handles container traffic for BMW in the form of imported engines and transmissions from Germany, as well as the export of maintenance parts and vehicle kits for emerging markets.

“Together with such partners as SCPA, BMW has become part of the fabric of this great state and is a wonderful illustration of what can be achieved when federal, state and local government work hand-in-hand with business,” said Manfred Erlacher, president and CEO, BMW Manufacturing. “I am honoured to celebrate the two millionth BMW exported through the South Carolina Ports.”

SCPA completed a $23m renovation of its Columbus Street Terminal in 2011 to add capacity for growing vehicle volumes. BMW is currently the largest user of the terminal.

SCPA also opened an inland port in Greer, Southern California, in 2013 to assist with the domestic shipping of vehicles by rail. BMW was its launch customer but since then, it has added more carmakers and last year handled 75,000 rail moves.

“SCPA is proud to serve BMW’s just-in-sequence supply chain needs through our Charleston and Greer facilities and we look forward to supporting their continued future growth,” said Jim Newsome, SCPA president and CEO.