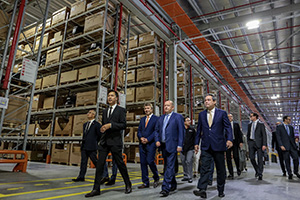 BMW Group has officially opened a 130m ringgit ($30m) logistics warehouse and parts distribution centre in Malaysia that is set to support 23 countries in the region.

It is situated on over 236,220 sq.m of land in the Free Industrial Zone of the Senai international airport in the southern city of Johor Bahru, and is the largest facility of its kind in the Asia Pacific region, according to the German carmaker.

Hendrik von Kuenheim, senior vice-president for Asia, Pacific and South Africa at BMW, said: “The record sales performance we achieved in Asia last year and in the first quarter of 2017 is a testament to the strength of the BMW Group in the region. In that, we believe Malaysia to be a key market that supports our strategic business direction in expanding our footprint in the region.”

Completed in December, the new distribution centre marks the first phase of the construction of the premium automaker’s facility there.