BMW opts for Eco Plus from DB Schenker Rail 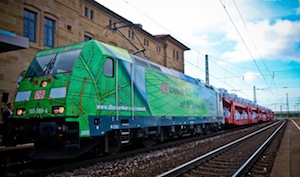 DB Schenker Rail has begun transporting vehicle components in Germany for BMW using its Eco Plus service between Frankfurt am Main to the carmaker’s plants in Regensburg and Landshut. The service, which DB Schenker promotes as being CO2 free because it purchases the electricity used from renewable sources, will run five times a week. The company said it could enable BMW to reduce its carbon emissions by over 2,000 metric tonnes each year compared to regular rail transport.

"The trend toward environmentally friendly activities is increasingly important, and preventing carbon emissions is playing an ever greater role,” said Axel Marschall, member of the Management Board of DB Schenker Rail responsible for Sales. “Another important customer has opted for our green transport solution, which avoids emissions altogether instead of compensating for them using certificates."

Audi also uses the Eco Plus service for the movement of vehicles from its Ingolstadt plant in Germany to the port of Emden on the north coast of the country. It was the first company in Germany to do so when it adopted the service in 2010.

The carbon-free transport offering is available on routes in Germany, but DB Schenker Rail plans to expand it to international routes. Customers already have the option of compensating for carbon emissions generated on legs outside of Germany, by combining Eco Plus with the Eco Neutral product option. DB said it uses 10% of the additional revenues from Eco Plus to finance the construction of new power plants for generating and storing renewable energy. The entire group has set out to reduce CO2 emissions by 20% of 2006 values by 2020.