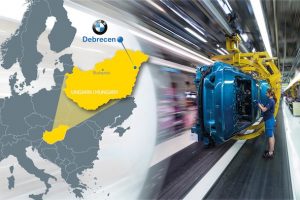 BMW has announced it will build an assembly plant in Hungary next year, near the town of Debrecen in the east of the country. The German carmaker said it had chosen Debrecen because of the advantages it offered in terms of infrastructure, logistics connections and proximity to the supplier network. It also said that a key advantage of the area was its qualified personnel.

Although BMW did not specify which models would be manufactured in Hungary, it said the facility would be able to produce both combustion and electric-driven models on a single production line. To support that the company said the plant would employ the latest digital technology in support of automation, assistance systems and flexible logistics.

Oliver Zipse, BMW’s board member for production, said: “In the future, every BMW Group plant in Europe will be equipped to produce electrified as well as conventional vehicles.”

Hungary for growthBMW Group has been operating a representative office in Hungary since 2004 and has links to many of the country’s suppliers. It purchased materials and services worth €1.4 billion in Hungary last year.

“The BMW Group’s decision to build this new plant reaffirms our perspective for global growth,” said Harald Krüger, chairman of the BMW Board of Management. “We are strengthening our activities in Europe to maintain a worldwide balance of production between Asia, America and our home continent.”

BMW is the latest in a number of carmakers investing in Hungary. Last month Mercedes-Benz Cars started work on plant in Kecskemét with a similar investment figure and tier one parts supplier Continental announced it was building its seventh plant in the country back in March. Audi and Suzuki also have car plants in the country.

In terms of logistics connections BMW has renewed its contract with DHL Freight to handle overland transport services in 17 European countries and DHL has added a digital supply chain management service as part of the new contract.