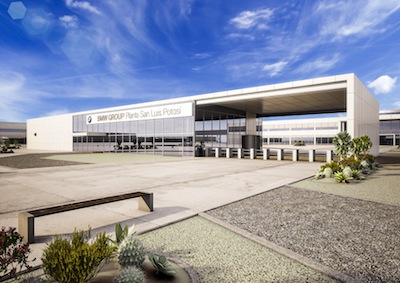 BMW has said it will produce the 3 Series at the new plant it is building in Mexico, in San Luis Potosi. At the same time, it will be phasing the 3 Series out of production at its plant in Rosslyn, South Africa, and instead building the X3 SUV model there.

Last week, the carmaker held a ground-breaking ceremony to mark the start of construction on its plant in Mexico. It plans to start production of the 3 Series there in 2019, with an annual output of 150,000 units.

BMW Group has operated a local sales company in Mexico since 1994, and opened its purchasing and supplier network there in 2008. Last year, the BMW Group purchased products worth more than $2.5 billion from Mexican suppliers and sold a total of 17,475 vehicles (12,170 BMW, 5,305 Mini) – an increase of more than 17% over the previous year.

At last week’s ground breaking ceremony, San Luis Potosí’s governor, Juan Manuel Carreras López, acknowledged that BMW was an important partner for the state and reciprocally, the state had attractive prospects for automotive production, including logistics.

“San Luis Potosi is an attractive state for the automotive industry with skilled workers, a logistically interesting location and the necessary infrastructure for the development of this kind of project,” he said. “In San Luis Potosi, we are ready to support the industry.”

In South Africa, meanwhile, the company said it was as excited about the future prospects that manufacturing the X3 at Rosslyn would unlock. Those prospects included the fact that BMW is looking at growth potential in sub-Saharan Africa, a market it said was “keenly suited” to the X3. While markets and volumes from production in Rosslyn have not yet been concluded, building the supply chain is a prime concern for the carmaker.

“The development of the local automotive supply chain in relation to future X3 production is a priority for BMW Group South Africa as part of the R6 billion ($410m) investment plan for X3,” a spokesperson for BMW South Africa told Automotive Logistics. “More detail will become available as these plans reach fruition, however an increase in local supply is a certainty.”

The Rosslyn plant was the first manufacturing facility in the group set up outside Germany, back in 1973.