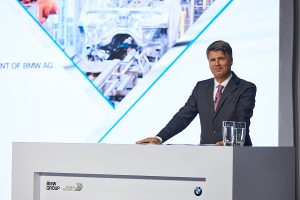 German carmaker BMW Group has announced a $600m investment at its largest manufacturing facility, Spartanburg, in the US state of South Carolina, as it prepares it for future generations of the X-model SUV range.

The company has produced 3.9m vehicles since production began at the plant 25 years ago. In that time, $8 billion has been invested.

Speaking at the plant to launch the new generation of the X3, Harald Krüger (pictured), chairman of the board of management at BMW, highlighted the large proportion of Spartanburg production that is exported and also the strong local supply chain. Of total production, 70% is exported to more than 140 countries.

“BMW was once again the leading US automotive exporter by value in 2016 – a title we hold with pride,” he said.

The BMW Group has 235 local suppliers in the US. In 2016, 80% of the group’s purchasing volume in the North American Free Trade Agreement (Nafta) area originated in the US.

The US is also the company’s second-largest purchasing market, after Germany, and accounts for €5.2 billion ($5.9 billion) annually.

US president Donald Trump has been highly critical of the trade deficit the country has with Germany and has also threatened to impose tariffs on German cars imported into the country from plants in Mexico and further afield.

The president is also looking at renegotiating current Nafta arrangements between Mexico, Canada and the US.

“Free trade has made our joint success story in South Carolina and the US possible – a story we want to continue, together with all of you. I firmly believe in free trade and open markets. It is essential for global businesses and economies around the world to flourish,” said BMW’s Krüger.

German automotive manufacturers have quadrupled US production since 2009 from 214,000 units to 850,000, according to Germany’s automotive industry association, the VDA.

“For those who fear globalisation, embrace it, because it is not going away,” said Graham.

“If you are looking for an example of how globalisation can be a net positive for the American people, come to South Carolina. We will show you how it is done. We will entice the best companies in the world to spend billions of dollars, they will make money, and our citizens will have the best jobs we could ever hope for as politicians,” he added.