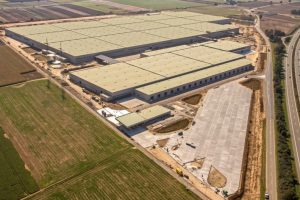 BMW is linking its spare parts warehouse in Wallersdorf, Germany to the rail network in an effort to reduce emissions.

Rail services are expected to begin in September this year, following two years of development, and will remove 17,500 truck journeys every year, yielding a reduction of 88 tonnes in CO2 emissions.

The carmaker is working with DB Netz, the division of Deutsche Bahn that develops infrastructure, and Imperial Automotive Logistics, which runs the majority of the Wallersdorf warehouse. Property investment company Dibag Industriebau is also supporting BMW on the project.

DB Netz is installing the rail sidings, which will connect the parts distribution centre (PDC) with the rail line running between Landshut and Plattling. The company is also installing an electric signal box in Landau that will enable more train operations at the sidings.

Up to four trains a day will call at the Wallersdorf PDC and according to Christian Seidl, director of automotive for western Europe at Imperial, as many as 100 freight containers will leave the centre daily for the port of loading.

“Thanks to the new sidings, we can load the container consignments onto railway wagons inside the building,” said Seidl. “The logistics sector has once again proven that it can make tangible contributions to easing the pressure on traffic and the environment through projects that involve a change in the mode of transport being used.”

“We’re delighted that our parts warehouse in Wallersdorf is now being connected to the main network of routes operated by DB Netz, as planned,” said Thomas Grupp, head of central spare parts sales at BMW. “The sidings and the associated switch […] will significantly reduce the volume of truck traffic and therefore CO2 emissions.”

The parts warehouse is located adjacent to BMW’s distribution centre, which is managed by Kuehne and Nagel.