BMW tracking: Prevention is better than a cure 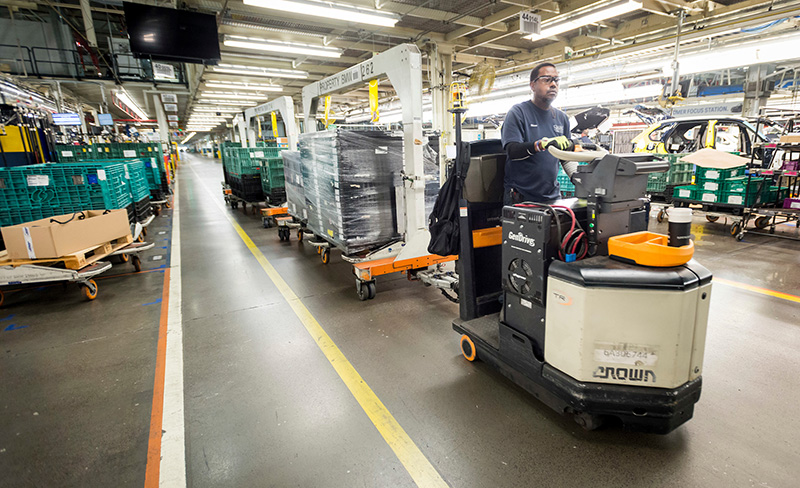 The plant has become a hub of traffic and material on a monumental scale. According to Alfred Haas, department manager for material control and supply assurance at BMW Manufacturing, which runs BMW’s US production, the plant consumes around 6m parts per day as part of a fast-moving supply chain that includes around 1,100 trucks arriving there each day. It’s also a highly intermodal, multi-directional chain. Aeroplanes with BMW and supplier freight arrive from Germany at nearby Greenville-Spartanburg airport every Tuesday and Friday, managed by German logistics provider, Senator International. And at any given time, multiple container ships are moving across the high seas with BMW parts shipping to or from the plant.

A nearby inland port in Greer handles around 50 inbound containers of imported material per day, mostly from Europe, received by rail from the port of Charleston and dispatched to the plant based on production needs. Meanwhile, a rising export flow of parts moves the other way. A warehouse at the plant already packs around 50 containers per day of semi-knockdown kits for export to countries including Brazil, Egypt, Thailand and Malaysia, where local plants assemble models. Recently, a second warehouse was built to pack part-by-part exports to plants in South Africa and China that will also build the X3. BMW expects kit and parts exports to reach 150-200 containers per day as global output ramps up over the next few years.

The complexity of the supply chain makes the job of Haas’s material control team all the more important, with responsibility for material destined for the plant as well as for export material up to destination ports of entry. And with recent investments in new tracking and visualisation systems, the plant’s logistics management processes are also starting to look as modern as the products they are tracking. Indeed, the department has started to resemble the air traffic control centres at major airports.

This summer, the carmaker launched a pilot system via SAP software specialist Leogistics that includes real-time tracking of material in transport across modes.

In the first phase, the Leogistics system covers all non-just-in-sequence (JIS) material moving to the plant from North American suppliers, which currently makes up around 150-200 trucks per day. The information can be viewed directly on a mobile app, while BMW has also installed several large, flat-screen TVs in the middle of the traffic department at the plant displaying a map that includes all active trucks en route, as well supplier locations, crossdocks and ports. The trucks are tracked via GPS in cabs, or if a logistics provider doesn’t track trucks this way, locations are based on data transmissions from the carrier and driver.

It’s an approach that makes good use of existing technology and information in the supply chain, and provides it in a highly user-friendly interface for BMW’s logistics team.

Building on successDespite its high volume and growing complexity, the Spartanburg plant was already achieving a high level of delivery stability and production control, thanks in part to a team of BMW transport planners and a network of reliable third-party logistics providers managing carriers across the continent, including Penske Logistics, Protrans and Benore. Of the 1,100 trucks that arrive at the plant daily, around 700 move parts JIS or just-in-time (JIT) to the assembly line. Haas also points to a rising share of ‘long-distance JIT’ deliveries that move material in production sequence from as far south as the Mexican border, and from as far east as Indianapolis, Indiana.

“These deliveries may require a small amount of re-sequencing, but in most cases we’ll have just 2-5 hours of inventory on hand,” says Haas, who notes significant savings in space and overall inventory for such deliveries.

Haas, who has been at the Spartanburg plant since the mid-1990s, just a few years after it opened, has long emphasised the importance of visibility and information tracking for inbound production material. BMW’s SAP MCP (master control program) system already stores and tracks inventory levels and integrates shipping notifications and scans at key locations across the supply chain. Furthermore, BMW is unique among most North American carmakers in that its 3PLs scan shipments they collect from suppliers prior to issuing advanced shipping notices (ASNs) to BMW. It is more common in the US for suppliers to send ASNs to assembly plants once parts are ready for collection.

[mpu_ad]According to Haas, having forwarders verify and scan the shipment ensures that quantities are more accurate, since supplier shipments tend to have a higher frequency of errors. “We find that suppliers might send an ASN that they are dispatching 1,000 parts, but upon receipt it turns out the shipment was only 800, and you may not find out until it’s too late and you have fewer parts at the plant than planned,” says Haas. “We find that ASNs from suppliers have accuracy levels of 90%; by using our shipping forwarders, we get up to 99% accuracy.”

The Leogistics solution, meanwhile, builds upon all of these existing processes and information. The system is entirely integrated into BMW’s SAP system for production, so clicking on a truck, supplier location or crossdock shows up-to-date information on the quantities shipped, as well as inventory at the plant for the relevant parts; this lets traffic planners see exactly when inventory levels might be getting critically low.

For example, the moving trucks on the map are displayed in colours based on their status. A truck is green if a delivery is on track, while it flashes in a warning yellow if it is falling behind schedule but BMW still has sufficient inventory at its plant to avoid line stoppages; trucks are red if they are late and BMW lacks inventory at the plant. Planners also receive emails automatically in the event of exceptions, allowing them to make quick decisions about expediting freight.

Along with supplier and truck mapping, BMW has overlaid the network map with subscriptions to professional weather, traffic and roadwork monitoring services that further help planners to identify hot spots and potential problem areas.

It has also added separate services that track flights and container ships. Haas says that aeroplane locations are very accurate, to within a matter of minutes. Ship locations are also helpful, though determining a vessel’s destination time is complex, based on wave height and weather patterns at sea. Still, planners track the ships that have BMW containers of import or export material and analyse locations to see if material might arrive late at a port.

"Bringing the information together like this, being able to visualise it and combine it with the plant and SAP data, helps make things more preventative." - Alfred Haas, BMW

Quick to adaptThe plant’s screens also show information from SAP that helps BMW track JIS production and to understand where a problem may arise. However, in the next phase the system will bring together this information with GPS tracking and clearer visualisation. “Having this visibility will be critical, because if we can see an issue in Laredo, Texas, for example, we will still have time to act and prevent line stoppages,” says Haas.

According to Haas, much of the information across the Leogistics platform was available in one way or another to BMW, but often through separate 3PL systems. “Bringing the information together like this, being able to visualise it and combine it with the plant and SAP data, helps make things more preventative,” he says.

[related_topics align="right" border="yes"]Haas has ambitions to improve visualisation further and extend accuracy to other parts of the supply chain, including yard management. He suggests that it would already be possible to plan for more advanced programming and equipment across the network, but thinks it is important to be flexible and adapt quickly to new technology, rather than always waiting for the most updated system. He has taken the same approach with mapping solutions, choosing to move towards the app and visualisation system even before every tracking method has been fully integrated. And in the meantime, the company is already literally starting to see the benefits.