BMW’s Mexico plant will use advanced logistics and localisation

BMW has joined the race for a production footprint in Mexico with the announcement that it is building a plant near the city of San Luis Potosi. The company said that a large number of free trade agreements, a solid network of suppliers and a well-developed infrastructure, with access to all delivery modes, were decisive factors in the move. 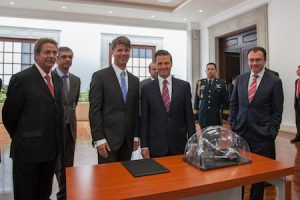 The German carmaker is planning an annual capacity of 150,000 units at the Mexico plant, something that is said would put it in a good position to take advantage of the growth potential in the North American region. Output at the Mexican plant combined with a boost to annual capacity at its Spartanburg plant in South Carolina will bring annual production across NAFTA to 600,000 units by 2020. BMW has recently invested $1 billion in the Spartanburg plant to expand yearly production to 450,000.

The development of the supplier base in Mexico and the supporting logistics processes underpinning it are important factors for BMW, and not just for local production.

“We see great potential in extending our current supplier base in Mexico for the new plant and for selected components on a global perspective,” a BMW spokesperson told Automotive Logistics. “Logistic and quality requirements in Mexico will be the same as worldwide. In order to meet all requirements at first day of production, the BMW Group has started initiatives already.”

Logistics concepts for Mexico
While detailed information on the logistics set up for the new plant is not yet available, the spokesperson told Automotive Logistics that the main principles included direct delivery along the lines of the ‘warehouse on wheels’ concept. Here drivers delivering semitrailers of inbound components do not need to wait for a time window for unloading but can detach them and return with another trailer filled with returnable containers. Shunt trucks move the delivered semitrailers and RFID will be used to manage the movement of the containers.

The company said that infrastructure for truck, rail and air freight connectivity, as well as deep-sea port accessibility, were all factored within the site selection in San Luis Potosi, which is in central Mexico. The port of Altamira is around 450km to east, for instance.

The carmaker said it was aiming at a high degree of local parts production in Mexico and was looking at attracting suppliers close to the factory.

“In the numerous exchanges we had with current and potential suppliers in Mexico we have received very promising reactions,” said the spokesperson. “We are sure that BMW Group's commitment to Mexico will [be] strongly supported by local suppliers and further strengthen our relationships. Besides the classic supplier customer connection we think there are further fields of cooperation, such as training and education for specific engineering and manufacturing skills.”

The company added that it wants to go beyond localisation of just-in-time and just-in-sequence parts but recognised there would be a number of components where local parts production does not make sense because of volumes or the very high investments needed.

FTAs mean lower production costs
Another significant factor in BMW’s decision to produce in Mexico was the strong free trade network supporting production and exports. Mexico has a total of 12 FTAs involving 44 countries.

“The country's position as a member of the NAFTA trading group was key to BMW's decision to make the investment in the new plant, as was the country's membership of other free trade agreements, including the country's relationship with the European Union and the Mercosur member states, which include Argentina, Brazil, Paraguay, Uruguay, and Venezuela, and Bolivia.”

This is backed up by BMW, which said that the trade agreements Mexico was having with other countries were a positive factor in its decision to build the car plant there. “It shows not only the good relationships of Mexico with other countries, but also Mexico's willingness and determinism to be a competitive place in the world,” said the spokesperson. “This attitude is fitting well with BMW Group's values.”

BMW’s announcement follows on the heels of one that Daimler and Nissan made recently that they would invest in a new joint venture (JV) manufacturing site at the location of Nissan's existing Mexican operation Aguascalientes.

Also, read our indepth report on the latest developments on the Mexican market here