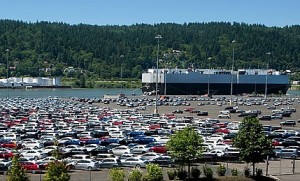 North American Class 1 rail provider BNSF is expanding its 11-hectare North Rivergate Vehicle Facility at the port of Portland in Oregon, in response to an increase in the number of vehicles handled there. The company has bought an additional two hectares from the port of Portland for $1.35m to develop vehicle staging and parking areas, as well as siting administrative support for vehicle handling.

"BNSF Railway’s investment and growth plans for their auto business are aligned with the port’s business objectives to enhance the Portland region as a hub for auto logistics," said Joe Mollusky, the port's real estate program manager.

BNSF Railway’s automotive rail network provides access to automotive plants throughout the US and Mexico. Vehicles are received by rail at the Rivergate facility, processed and then distributed by truck to auto dealerships or exported by ship.

Portland currently ranks in the top ten busiest vehicle ports in North America (and the second on the West Coast), with volumes exceeding 284,000 – the great majority made up of imported brands. Last year it handled 252,613 imports, 9,899 exports and 18,737 domestic vehicles. Toyota Logistics Services at Terminal 4 imports and installs accessories for Toyota, Lexus and Scion vehicles for the North American market. Auto Warehousing Company (AWC) handles processing for Hyundai imports and Ford exports at one end of Terminal 6 (to China and Korea), and they also process Honda and Acura vehicle imports for American Honda Motor.

At the end of last year Ford started exporting North American-made vehicles from the port to China, with AWC processing the vehicles. It already exports from there to South Korea. Models exported to China include the Edge crossover and Explorer SUV, and it is expected to add the Lincoln this year. AWC recently completed a $2.8m expansion of their vehicle processing facility at the Port’s Terminal 6, where Hyundai imports and Ford exports are handled.

A spokesperson for the port of Portland said that export volumes for 2014 through March "were already close to doubling total volumes for the entire 2013 calendar year and could grow to 40,000 from close to zero just a few short years ago".

Last year BNSF committed $4.1 billion and made a number of investments in supporting services for the automotive industry. This year it plans to increase that spend by a further $1 billion.