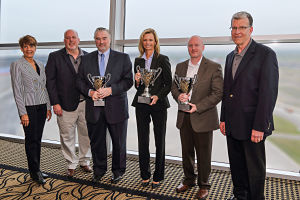 North America railway operator BNSF has received the Toyota Logistics Services President’s Award for the third year running. The award is the "highest supplier honour given to service partners who demonstrate combined excellence in quality, customer service and on-time performance,” said BNSF in a statement.

The company has also received the Logistics Excellence Award for on-time performance and quality.

“With regards to on-time performance, BNSF continuously partnered with us to identify opportunities to improve transit times and their overall network efficiency to support our business,” said Bill Barrett, Toyota Logistics Services’ senior rail and truck strategy and operations manager (pictured second from the left).

“When it comes to quality, BNSF epitomised what it means to strategically think continuous improvement. They embraced problem-solving practices (Toyota Business Practices) to identify countermeasures for focus lanes, resulting in a damage rate well below our national objective.”

In 2016, BNSF handled more than 400,000 Toyota, Lexus and Scion vehicles throughout the US and Canada. The railway company says it delivered 99.86% of the vehicles damage-free, giving it one of the lowest damage rates in the industry.

BNSF operates about 52,000km of track in 28 states and also operates in three Canadian provinces.