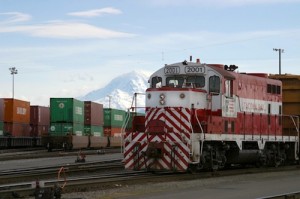 “We estimate that this new service could save 3.5 to 4 hours on all outbound trains, which should benefit all of our customers,” said a spokesperson for the port.

Improved turnaround will free up much needed rail capacity more quickly, not least for the movement of finished vehicles through the port. Tacoma, which is in Washington State, handled almost 160,500 vehicles last year, all of them imported. And year-to-date by July this year it had handled 158,800, up almost 10% on the same period in 2013.

In terms of container traffic, so far this year the port has seen volumes rise 10.2% year-over-year to more than 902,000 TEUs.

Prior to the contract BNSF locomotives that hauled unit trains of vehicles, containers and oil between the port were disconnected from the trains they powered and sent across the Puyallup River for servicing at a BNSF facility.

Tacoma Rail is now refuelling, doing minor maintenance and stocking the locomotives at its Tideflats yard, which is closer to the terminals. It has provided similar services for the region's second-largest railroad, Union Pacific, for several years.

Tacoma Rail currently services about 60 locomotives a day, and the number could rise to 90 as traffic at the port increases.