Bosch back in business in Iran 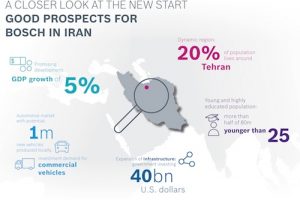 Tier one parts supplier Bosch is the latest company to announce its return to Iran, following the lifting of economic sanctions earlier this year, with the opening of a new regional office in Tehran.

The German company said it saw “great potential in Iran’s growing vehicle market” where local vehicle production is expected to hit 1m units this year. It first started selling products in the country in 1924.

“We are delighted to be back in Iran,” said Uwe Raschke, the Bosch board member responsible for Europe, the Middle East and Africa (EMEA). “In our quest to pick up speed quickly, we are benefitting first and foremost from re-establishing contact with former local partners and customers.

“The country’s potential is tremendous,” added Raschke. “We expect to see the Iranian economy grow by just under 5% this year. The medium term is also highly promising.”

Bosch’s activity in Iran, along with 15 other offices in the wider Middle East region, is being coordinated by its regional subsidiary in Turkey.

“Turkey plays a prominent role in our growth strategy in the Middle East,” Raschke said.

The company is investing around €500m ($570m) between 2015 and 2016 in expanding local manufacturing and engineering in the region. Bosch opened a new regional headquarters in Istanbul in 2015 and recently opened a sales office in Lahore, Pakistan.