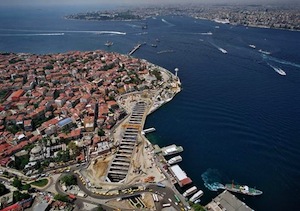 Last week saw the opening of the long-awaited Marmaray tunnel under the Bosphorus Strait in Turkey, providing a direct rail route not only between the two sides of Istanbul for the first time but between the European continent and Asia. The 1.4km tunnel is part of the Marmaray Project, a €1.91 billion ($3.07 billion) investment that connects rail lines from Europe to Asia, as part of a larger plan to establish an intercontinental high speed rail (HSR) network by 2021. The tunnel section has taken nine years to complete because of delays caused by significant archeological discoveries.

The tunnel, which runs 55 metres under the Bosphorus, will provide an uninterrupted, modern, high-capacity rail system for commuters and, later, industry, running from Halkal on the European side to Gebze on the Asian side. Plans are in place to use the link for freight once public commuter trains have stopped at 23:00 until 07:00 the following morning.

The tunnel was built by Japan's Taisei Corporation with Turkish partners Nurol and Gama. The bulk of financing came from the Japan Bank for International Cooperation.

The link is crucial in alleviating the chronic congestion that plagues Istanbul’s roads and promises to improve the poor infrastructure that Turkey needs to support its industry, including the automotive sector. In terms of Turkey’s plans for a HSR line, however, questions remain over a proposed 100kmph speed restriction through the tunnel.

There also remains lot to be done about accessibility on Turkey’s wider rail network with better allocation of rail yards required through the country’s industrial zones. The HSR network already connects Eskisehir with Konya and a connection between Istanbul and Ankara is already under construction, with further stages to link to Izmir, Konya, Ankara, Sivas and Kayseri being planned. By 2022 the almost 2,500km over an overall 3,200km route is expected to be complete.

In September this year DB Schenker Rail introduced a service between Germany and Turkey that will eventually provide five pairs of trains per week to enhance its existing service between Western Europe and Turkey. The service will support the movement of finished vehicles and automotive parts.