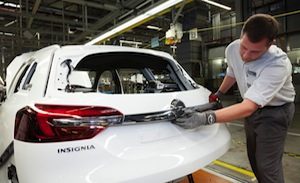 GM’s Opel division is cutting production at two of its plants in Germany as a consequence of the UK’s vote in June to leave the European Union (EU).

The company said it was anticipating slower sales of the Corsa and Insignia models and that this would affect production at the Eisenach plant, which makes the Corsa hatchback, and its Rüsselsheim facility, which makes the Insignia. The UK is the biggest market in Europe for these two ranges.

Opel has confirmed that it will run short working weeks, or Kurzarbeit, a German approach that aims to reduce layoffs by putting workers on reduced hours while the government subsidises their salary. A spokesperson for the OEM confirmed the move but could not specify the number of vehicles or production days that would be affected.

“The exact number of days will depend on how effective sales are in months to come,” he told Automotive Logistics. “We expect a more difficult sales environment in the UK. The impact on sales from the Brexit vote is mainly [down to the] foreign exchange for all OEMs. For every vehicle sold, revenue is approximately 20% less compared to before because of the pound/euro or pound/dollar relationship."

The pound has fallen 13% against the euro since the EU referendum.

Last month, GM’s chief financial officer, Chuck Stevens, said the company might need to cut costs in Europe to offset a potential $400m impact for the remainder of 2016, triggered by the UK’s Brexit vote.

“We are facing strong headwinds at the moment, particularly in our largest market – the United Kingdom,” added Opel’s CEO, Karl-Thomas Neumann, in a video posted online. “The Brexit decision is not a good omen. Therefore, the second half of this year is going to be anything but easy.”

This latest development for Opel adds to concerns that its sister Vauxhall division in the UK could also be facing an uncertain future as a consequence of the result – though speculation over the potential closure of its facility in Ellesmere Port was dismissed by the company in the wake of the Brexit result.

However, Vauxhall said it was important that business continued to benefit from the free movement of goods and people and that it fully supported the UK remaining part of the European Economic Area (EEA).

Exactly how the UK will interact in the EEA is unclear as the reshuffled Conservative government attempts to find a way forward for the country. That vagueness is affecting business and consumer activity.

Market analyst IHS Automotive said that while the sharp fall of sterling following the vote (down to a 30-year low against the dollar) would help UK exports, it would also push up inflation. That would raise company input costs and squeeze consumer purchasing levels, it said.

Opel was quoted in the Financial Times last week as stating: “The Brexit situation is an issue for everybody who does business in and with the UK at the moment and we already announced last month that there will be an impact on our European financial performance if the value of the pound remains at its current level for the rest of the year.”

The Opel news follows comments made recently by Nissan’s CEO, Carlos Ghosn, who said the company’s future investment plans in the UK were on hold and would depend on the outcome of discussions between the UK and the European Union on how to continue to trade in the wake of June’s Brexit vote.

The consequences of the Brexit vote for the UK car sector and its relationship with both Europe and the wider automotive industry will be discussed at the inaugural Automotive Logistics UK Summit on October 5th-6th.