Britain better in the EU, say carmakers and suppliers 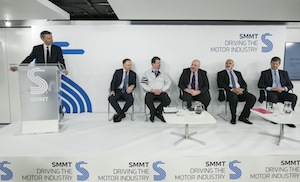 Senior executives from carmakers and tier suppliers have called for the UK to remain in the European Union (EU), ahead of the nation’s referendum on the issue on June 23rd.

Speaking at the Society of Motor Manufacturers and Traders (SMMT) in London last week, BMW board member Dr Ian Robertson said the German carmaker was “absolutely passionate” that Britain’s role in the EU was “a two-way street”.

BMW owns Mini and Rolls-Royce, both of which are predominantly produced in the UK and exported.

“Britain’s role in shaping a reformed EU is good for business, good for consumers and good for the largest trading bloc in the world,” added Robertson, stressing that the resurgence in the British motor industry had been built on free markets and the free movement of cars, components and labour in a market of 500m people.

“[BMW has] invested just shy of £2 billion ($2.8 billion) in recent years and has around 8,000 employees on the ground [in the UK],” he said. “If you add dealers and suppliers, you approach around 50,000 in total. That relies on the borders through which people are free to move around,” he said.

He also pointed to significant trade in the export of engines and pressings across Europe; BMW builds engines at its Hams Hall plant in the Midlands.

Open and free access vitalTony Walker, deputy managing director of Toyota Manufacturing UK (TMUK), said an integrated European supply chain was critical to Toyota’s plants in the UK, which include an engine plant in Deeside, North Wales and an assembly plant in Burnaston, Derbyshire and which build cars, engines and parts mainly for Europe.

While careful to make clear that Toyota was fully committed to its employees and operations regardless the referendum result, Walker said leaving the EU would open up an uncertain future with a high risk of operational and technical difficulty. He also said there was a risk of increased costs.

“This cost increase comes from our assessment of the possibility, among other things, of there being some tariff or non-tariff barriers, and some loss of efficiency for customs administration and logistics operations,” said Walker. He added that there would also probably be a loss of harmonisation in technical regulations and homologation in the long term.

“We think there will be negative impact on Toyota’s UK manufacturing business if the UK leaves the EU,” concluded Walker. “Remaining in the EU is best for our business.”

From the tier one perspective, representatives from three companies operating in the UK were at the SMMT meeting: GKN, ITM Power and Magal Engineering. Gamil Magal, CEO of components supplier Magal Engineering, also expressed concerns over the movement of parts and people across borders. Magal Engineering moves material and finished parts between France, Germany, Turkey and the UK, among other locations.

“Leaving the EU would make things very difficult for my company,” said Magal. “Number one would be the transportation of parts and finished goods. More than 60% of the product is exported to Europe. The other 40% is exported to the rest of the world or [stays] within the UK.”

Magal said it would be difficult to move components from one regional division to another without penalties, for one thing. The movement of skilled labour was another important consideration, he said; and taken together, this risked holding up further investment.

Pros and cons for LSPsExecutives from a number of logistics providers declined to state their outlook. However, some major players have said the UK’s continued membership of the EU would be the best outcome.

"We believe that the integration of markets benefits societies, ensures stability and generates prosperity,” said a spokesperson for DHL, which runs significant logistics operations for automotive freight between the UK and mainland Europe. “The economic and political challenges that all European countries face today, as well as future opportunities for growth, can be best addressed together. DP-DHL Group's position is to support efforts to keep the UK within the EU, thereby averting a ‘Brexit’.”

For some providers, frustration over the regulation emanating from Brussels is enough to tempt them towards the exit. However, there are questions over whether such rules would really be removed, especially if the UK wanted to retain access to the common market.

“I’m sure every fleet operator feels bitterly aggrieved by the additional layer of road transport legislation imposed upon us by Brussels – the Working Time Directive and Driver CPC to name just two,” said Ray MacDowall, founder and chairman of finished vehicle carrier ECM. “But I very much doubt, if we were to leave the EU, that any existing legislation would be dropped. Or [if it was], it may be replaced by something similar.”

MacDowall added, however, that depending on the agreements reached, it might be possible to draw a line under EU legislation after a Brexit and prevent any further impositions and interference from EU lawmakers.

The London meeting took place on the back of a report by the SMMT showing that 77% of its members felt continuing UK membership of a reformed EU would be beneficial to their business. The report was based on a survey conducted by independent pollster ComRes in January and February.

See the next edition of Automotive Logistics magazine for more analysis of the impact of the EU referendum on automotive OEMs, tier suppliers and logistics providers, and of the SMMT’s survey results.

Issues raised by the referendum for the sector will also be under discussion at next week’s Automotive Logistics Europe conference in Bonn, Germany.