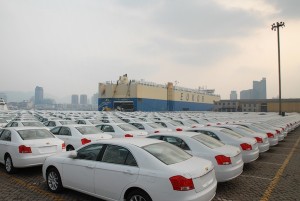 The China Association of Automobile Manufacturers (CAAM) has reported that while exports of vehicles made in the country were up 15% in May, compared with April, at 70,800 units, there has been a drop of 7.3% year-on-year. Of that figure, the number of passenger cars exported from the country hit 38,100, up more than 19% on April this year but, again, down 11% compared to the previous year. Commercial vehicles exported in May saw less of a drop at 2.4% at 32,700 units.

The gains on April figures were put into perspective by the drop that month saw based on year-on-year figures. CAAM’s analysis of customs data showed that in April the total export of vehicles was 68,000 units, down 13.4% year on year, while total imports stood at 96,000 units, down 26.5% year on year.

The trend is backed up by figures published by Chinese carmaker Geely at the beginning of June show that in May it exported just over 4,000 vehicles, a drop of 34% from the same period last year.

According to IHS Automotive there are a number of reasons behind the drop in exports of Chinese brands, one being the change in trade terms to certain export markets. The emission threshold has been increased gradually in a number of export markets making non-compliant models made in China no longer viable for export.

Paul Newton, director of IHS Global Insight told Automotive Logistics that exports have also been affected by an unstable economic environment, with demand decreasing, particularly in Russia, a key export destination for number of China's carmakers.

Newton also said that exports from China have been hit by a consumer shift in preference for  more spacious, comfortable vehicles against the entry-level models from China which no longer meet local preferences.

There is also the influence of localised joint ventures with foreign carmakers.

"After establishing a presence via exporting, some Chinese manufacturers have found solid local partners and with their help, have been trying to establish assembly plants locally," said Newton.

Domestic production also down
Against its export drop, Geely's figures showed that sales on the home market remained strong, up 41% year-on-year to more than 34,000 units. This result has been driven by sales of the EC7 and Xindihao models according to the carmakers, which between them accounted for almost 14,000 vehicles, up 47% on the same period last year.

Overall however, sales and production in China have also dropped. CAAM reported this month that the production of vehicles in China in May dropped below 2m, with a decrease of 5% on last month, and lower than that of last year.

This is largely down to the central government putting more emphasis on reform and consumption rather than investment-led expansion. GDP growth in 2014 was 7.4%, down from double digits in recent years, and the first quarter of 2015 came in at 7%.

China’s total vehicles sales in the first quarter saw a 3.9% increase compared to 2014, surpassing 6.1m vehicles. Light vehicle sales saw stronger growth, however, rising around 9% to 5.3m units, according to the Chinese Automobile Dealer Association (CADA). However, a number of indicators, including rising vehicle inventory and discounts, suggest that business is getting more difficult.

Read the most recent report from the Automotive Logistics China conference for more about the factors affecting sales, production and exports in the country.