Cadillac to export exclusive ATS and CTS V-series to Japan 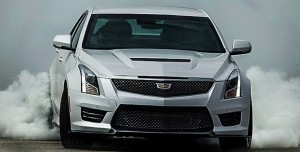 GM’s Cadillac division is supplementing the supply of its US-made luxury sports sedans, the ATS and CTS, in Japan, and will export small volumes of the V-series versions of the cars there subject to demand. The high performance cars are made at its Lansing Grand River assembly plant in Michigan.

“This latest endeavour is for our V-series – elite high performance editions of our ATS and CTS product lines, confirmed a spokesperson for the carmaker. “ATS-V is a 464 hp twin turbo V6 in coupe and sedan form. The larger CTS-V is a supercharged V8 at 640 hp in sedan form. Both of these add to the ‘regular’ ATS and CTS already in production and launch this summer here in the US.”

He went on to say that the V-series models were very exclusive offerings, especially in Japan, and the company has conducted an ordering programme there to specify numbers ahead of when the exports begin later this year.

The first regular CTS went into production at the Lansing Grand River plant back in 2001 and the plant now makes the CTS Coupe, CTS Sport Sedan and CTS Sport Wagon along with the V-series. The ATS, meanwhile, first went into production in 2013 following a $190m upgrade to the facility, and appears off the line in sedan and coupe versions.

As well as North America and Japan, the models are exported to eight other countries including Russia and the CIS countries, China, South Korea, the Middle East, Israel, Iraq and Switzerland. 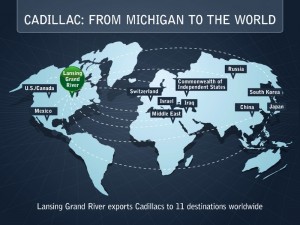 However, production was cut to one shift at the plant in November last year because of high inventories as sales fell short of expectations in the US. GM has since added the Chevrolet Camaro to the production line at Lansing Grand River with a $175m investment for new tooling and equipment. Its second shift will be restored at the end of the summer.

This year, operations began at a new $44.5m logistics facility at the Lansing Grand River plant. The 37,000 sq.m Logistics Optimization Center will be used to sequence and assemble parts to make manufacturing more flexible at the site, reducing transport and contributing to improved quality by reducing handling, according to the carmaker.