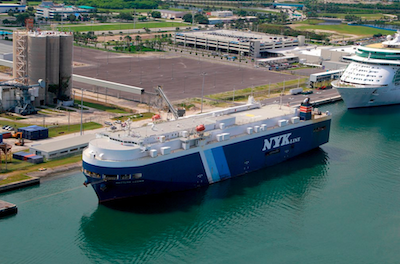 The steady growth in ultra-large container ships and stagnating demand for ocean freight shipments to Europe have combined with historically low spot freight rates in the dry bulk sector to severely hit profits at Japan’s NYK Group, according to the latest financial report.

However, healthy finished vehicle volumes between North America and Asia and some responsive thinking in the deployment of larger, more fuel-efficient vessels on those routes have led to growth in that sector. New automotive business in Saudi Arabia, Columbia, India and China has also helped to make steady gains for NYK.

The 2015 results for NYK’s overall business reveal some stark highs and lows. In the liner trade, the growth of ultra-large container new builds on European routes has made the oversupply of vessels worse.

“The usage of these new ships in Europe has caused a chain reaction worldwide as increasingly larger capacity ships have entered other shipping routes, severely disrupting the balance between supply and demand,” NYK said in its most recent review of operating and financial results.

Added to this, the negative impact of excess tonnage in the bulk carrier sector has been exacerbated by the ongoing production of new vessels, according to NYK. The result is that the Baltic Dry Index fell to all-time lows in February of this year.

Market conditions are sluggish in all regions for all types of vessels. Overall, bulk shipping business turnover fell 93.5 billion yen (9.4%) to 902 billion yen. In terms of profit however, the company saw a drop of 13.4% to 46.5 billion yen in bulk shipping. Furthermore, factoring in the impairment losses on dry bulk, carriers contributed to a year-on-year decrease in net income attributable to owners of the parent company of 61%, or 29.3 billion yen.

Robust demandThe car transport division of the bulk shipping business saw an increase in volumes moved. While not producing any figures, NYK said it had taken advantage of robust demand for car shipments to North America and Asia by steadily and effectively assigning vessels to those regions. It has also commissioned a series of “highly fuel-efficient ultra-large carriers” that it said have contributed to results on this side of the business.

In automotive logistics, the group has jointly established subsidiaries in Saudi Arabia and Columbia after reaching agreements with local business partners in each country. Last year NYK signed a deal with Ports Development Company to operate the first phase of the ro-ro terminal at the King Abdullah Port in Saudi Arabia, which is due to go into operation by the third quarter of this year.

It has also established a joint venture subsidiary in Columbia with Intermodal SA, a member of the Navemar Group, NYK’s agency in Colombia, called NYK Auto Logistics Colombia SAS.

In China, NYK has established a new vehicle-processing centre (VPC) that is being managed by a joint venture between NYK Automotive Logistics (China), which has a 75% share, and local provider, Tonglit Logistics, which holds the remaining 25%.

In India, meanwhile, NYK is working with APM Terminals on ro-ro shipments out of Pipavav port.

“By providing a diverse range of value-added services through these new operations, the NYK Group has been making steady progress toward expanding its businesses while meeting the needs of customers,” the company said in a statement.