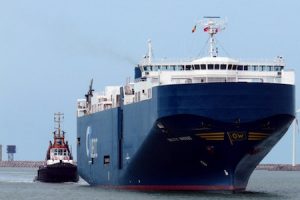 The ocean car carrier Baltic Breeze, which is chartered by UECC and Wallenius Marine Singapore (WMS), has collided with and sunk a fishing vessel approximately 1.5 nautical miles from the port of Vigo in Spain. Three of the crew of the Spanish fishing vessel have been reported dead with two still missing. Five of the crew were rescued from the water.

“Wallenius Marine Singapore and UECC regret the loss of life from the fishing vessel and offer heartfelt condolences to the families at this tragic time,” said UECC and WMS in a joint statement. “All involved parties will be co-operating fully with the authorities investigating this incident.”

The car carrier collided with the fishing vessel at approximately 01:00 UTC on April 1 (Tuesday). It immediately lowered a rescue boat to assist the search for survivors while the port authority deployed a rescue boat and helicopter. However, adverse weather conditions that are continuing today have hampered divers’ attempts to reach the fishing vessel, which now lies 52 metres below the ocean surface.

Sheena Campbell-Royle, a spokesperson at the Spanish division of MTI Network, which is handling crisis communications for UECC and WMS, told Automotive Logistics that until the findings of the investigation were published, it would not be commenting on the cause of the accident.

“Right now our principal concerns are for the missing sailors and for the families, both of those who have died and those who are waiting for news,” she said.

According to MTI the Baltic Breeze and its crew are currently in the port of Vigo.

“The ship is being checked throughout for any possible damage and divers will be sent down to check the hull,” said Campbell-Royle. “The ship and crew will remain in Vigo for the investigation and will renew their normal route once this has happened, once the ship has been certified seaworthy and once the authorities have given their permission for the Baltic Breeze to leave.”

According to UECC, the Singapore-flagged Baltic Breeze was not carrying any cargo at the time of the incident, and was scheduled to load cargo in Vigo on route to Algeria.  No locally produced vehicles were planned to be loaded.