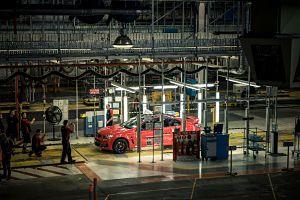 Just weeks after Toyota produced its final vehicle in Australia, General Motors (GM) has held a ceremony to mark the end of production at its Elizabeth plant in South Australia.

GM’s move marks the end of car manufacturing in Australia, after OEMs decided that manufacturing there was no longer cost-effective.

In 69 years of local manufacturing, more than 7.6m vehicles were built by the company for both Australian and export markets. At its peak in 2005, the plant produced a total of 153,026 VZ Commodore cars, with 60,518 of those exported to 10 countries.

Having announced the decision to discontinue manufacturing in 2013, the company, which operates under the Holden division in the country, has spent almost four years planning for the wind-down of the plant.

Holden chairman and managing director, Mark Bernhard, said: “With 85% of all workers to date successfully transitioning, we’ve worked closely with our people to support them.”

Employing approximately 1,000 direct employees in Melbourne and across national zone offices, Holden will also retain its design and engineering teams, working on local and global vehicle and transportation programmes. There are another 6,000 people employed across Holden’s 200-strong national dealer network.

In January this year, when announcing the exact closure date, GM also divulged that more than a third of the future Australian product portfolio would be sourced from Europe, with vehicles also being sourced from North America and Asia.

Holden will launch 24 vehicles and 36 new drivetrain combinations by 2020.

Earlier this month, Toyota officially ended production in Australia, having produced over 3.5m vehicles over more than half a century.

In October 2016, Ford closed its assembly plant in Broadmeadows in the Australian state of Victoria, after 90 years of production.