CargoLogicAir gets off the ground with automotive charters to Italy 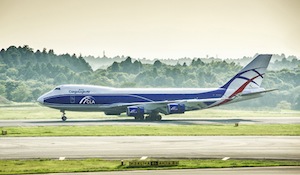 Following the granting of its air operator certificate (AOC) by the UK’s Civil Aviation Authority, the UK’s newest independent cargo airline, CargoLogicAir, has kicked off flight operations with automotive charters to Italy.

The company is based at London Standsted Airport and is offering cargo services on scheduled and charter flights. It said it aimed “to take a strong position in the segment of all-cargo and outsize logistics solutions” and has already taken delivery of its first Boeing 747-400 Freighter. It will add a second in July this year and by April 2018 expects to have five Boeing 747F aircraft in its fleet.

Ahead of the launch of scheduled cargo services, the airline has launched services with a shipment for Chapman Freeborn Italia, the global aircraft charter specialists, which organised two Boeing 747-400 Freighter charters with CargoLogicAir to Bari in Italy.

CargoLogicAir was set up in November 2015 under the direction of CEO, Dmitry Grishin, formerly vice-president of sales at Ruslan International. Grishin is joined by chief operating officer and account manager, Peter van de Pas, who previously held senior positions at KLM and Cargolux. Steve Harvey is the company’s chief commercial officer, having joined the airline from his previous post of regional charter sales manager, EMEA, at Atlas Air.

"We believe that the all-cargo airline business model has its place on the market and that we can achieve sustainable growth by specialising in outsize and flexible solutions for our customers,” said Grishin. “We are open to co-operation with all who share the same passion for cargo as we do. We are also very grateful for the help we have received so far from partners such as Boeing, Stansted Airport and Aeropeople, who have supported us in building the company and its capabilities."