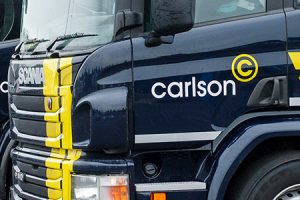 Carlson Vehicle Transfer has adopted Michelin's Effitrailer telematics system across its fleet of 150 finished vehicle carriers. Carlson, which is owned by Groupe Cat, transports finished vehicles across the UK and Europe.

The Effitrailer system measures trailer tyre pressure, as well as providing an onboard data link and electronic braking system data analysis, along with constant location information. The real-time data is sent to a dedicated fleet department via a web portal, with details of each unit's mileage, length of abnormal downtime and ‘wait-time’ status. Using that information, Carlson expects to reduce tyre repair and replacement costs, increase equipment uptime and minimise empty running, according to Michelin.

Fleet-wide adoption at Carlson follows a trial in which it gradually increased the number of trucks running with the system.

“The company had been researching telematics packages and Effitrailer really stood out as a market leader,” said Terry Wrycraft, Carlson's fleet manager. “We began the trial with six trailers and increased over a period of time to 60. As a result, we noticed a significant increase in vehicle utilisation, because we were able to identify tyre issues early and respond to them – resulting in a reduction in roadside assistance.”

Wrycraft went on to say that the onboard tyre pressure monitoring system (TPMS) provided constant analysis of the tyre pressure and temperature over every axle, ensuring any irregularity was immediately detected and “hugely counter-productive” problems were dealt with before they became costly.

“As a result, the programme comes with a commitment from Michelin to reduce all tyre-related trailer breakdowns [on vehicles] equipped with the solution,” continued Wrycraft. “With such a proactive tyre maintenance and replacement service running across our whole fleet, we’re seeing the positive effects Effitrailer has had on our business.”

Michelin introduced the Effitrailer system in 2015.